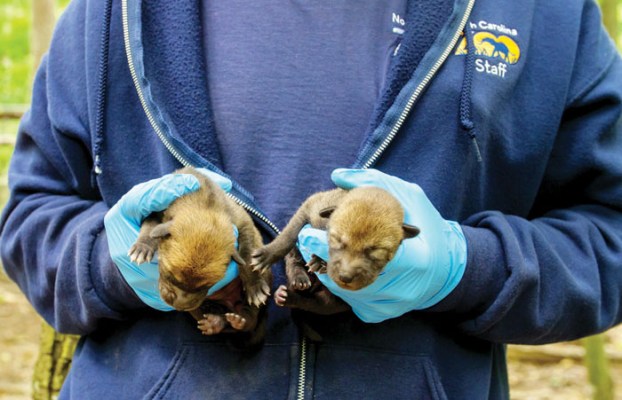 ASHEBORO —  The North Carolina Zoo announces the birth of two endangered American red wolves as part of its American red wolf breeding program. The two female pups were born on Monday, May 4, to parents Taylor (female) and Solo (male). This is the second litter for the zoo this year, which is the first time for two litters in one season for the zoo’s breeding program. On April 21, five pups were born at the zoo to parents Piglet (female) and Jewell (male).

All seven pups are all healthy and doing well.

The newest pups were named in honor of former North Carolina zookeeper Jessi Culbertson, 32, who worked with the red wolves for several years before passing away in 2019 after a courageous battle with cancer.

The pups are named Arrow, in honor of Jessi’s Native American Cherokee heritage, and May, for the month that both Jessi and the puppies share a birthday.

This litter brings the number of red wolves in the zoo’s breeding program to 27, making it the second-largest pack in the U.S. after Point Defiance Zoo and Aquarium in Tacoma, Washington.

The pups are being kept in a quiet, non-public viewing area of the zoo and have minimal contact with staff and keepers. This allows their mother to raise the pups with the least amount of stress in a natural habitat.

Only 15-20 red wolves remain in the wild, and they’re all in eastern North Carolina.

“It’s really a testament the staff’s dedication, teamwork and passion toward helping one of the most endangered canids in the world,” Hamilton said.

Once common throughout the southeastern United States, the wolves were driven to near extinction during the late 1960s, but the U.S. Fish and Wildlife Service began an aggressive conservation effort — the American Red Wolf Recovery Program — that led to new ways to track and protect the species.

The zoo has been part of the American Red Wolf Recovery Program since 1994. With these recent births, the zoo’s red wolf pack has bred 13 pups over the past three years and has successfully bred 36 wolves since the program began. Currently, there are about 240 (that number can change daily during the whelping season) red wolves in breeding programs throughout the U.S. Red wolves normally have three to five pups per litter.

The North Carolina Zoo led the successful efforts to have the American red wolf become part of the Association of Zoo and Aquariums SAFE (Saving Species From Extinction) program.

Under this program, the zoo leads in conserving the species and growing both the population in the wild and the animals under human care.

To learn more about the North Carolina Zoo and its red wolf program, go to www.nczoo.org

Doug Creamer: God’s got in all in control

By Doug Creamer For the Salisbury Post The other night I woke up in the middle of the night. I... read more