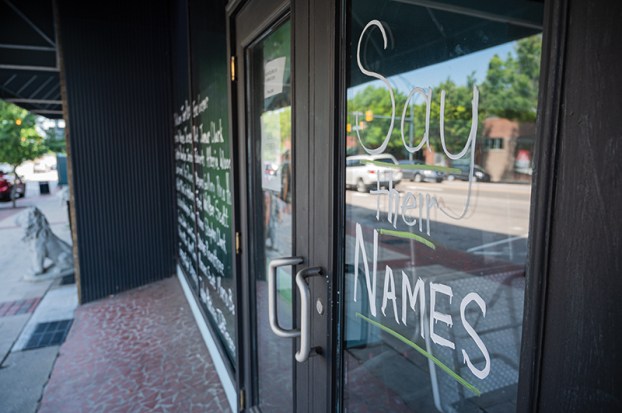 Josh Bergeron / Salisbury Post - The Fish Bowl has written names of people who have been killed because of police brutality to its front windows.

SALISBURY — On May 25, days after George Floyd died with a Minneapolis police officer’s knee pressed into his neck, Chris Ostle began reading a lot online about other victims of police brutality.

“It got depressing,” he said.

Not wanting to upset anyone in the community, he wasn’t sure what he should do or say. Ostle decided on writing the names of victims on the windows of the Fish Bowl bar downtown that he co-owns with Branson Hurst. Ostle said he tried to pick names only of people killed while unarmed and not resisting police.

“It seemed like something I should do. I have a platform and I wanted to say something,” he said. “I figured it was the most appropriate way I could do it.”

Ostle wasn’t sure when the names might wear away from weather, but for at least a week they’ve remained on the windows of the Fish Bowl as Black Lives Matter protests have made their way to Salisbury en route to spreading across the nation. 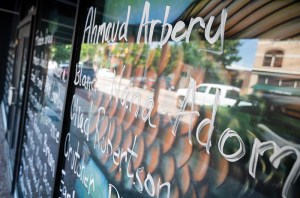 Josh Bergeron / Salisbury Post – The Fish Bowl has written names of people who have been killed because of police brutality to its front windows.

The problem isn’t new, Hurst said, but he feels like these names often get pushed into the shadows after briefly gaining attention. The window brings up names from the past as well as the past week.

“It’s a reminder that George Floyd isn’t the only one in recent history that’s been affected by this,” he said.

For example, Breonna Taylor is another name on the window. She was a 26-year-old black emergency medical technician who was fatally shot by police inside her home in Louisville, Kentucky, on March 13 during the service of a no-knock warrant.

The day after Ostle put the names up, some people stopped to talk and take pictures in front of the windows. The theme of saying the names of victims aligned with the drive-thru protest last week, he said.

People can’t go to the Fish Bowl now. It’s closed during Phase 2, Hurst said. They’re not sure when they’ll open, but when they do it’ll be at a limited capacity.

For now, their windows send a message.

“That’s what it’s all about,” Ostle explained. “It’s not about me. It’s about these folks that have been killed. I said their name in the voice that I had.”

By Natalie Anderson natalie.anderson@salisburypost.com SALISBURY — A youth-led group of protesters dressed in their “Sunday best” and gathered at the... read more