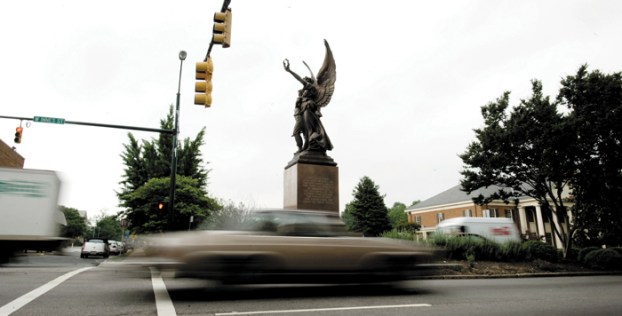 The Confederate Memorial statue of 'Fame,' the winged muse, holding a fallen soldier was dedicated in 1909 by the Hoke Chapter of the United Daughters of the Confederacy. It was a fund-raising project that was a decade in the making. Photo by Jon C. Lakey, Salisbury Post.

SALISBURY — The Robert F. Hoke chapter of the United Daughters of the Confederacy has agreed to the city’s plan to relocate the “Fame” Confederate statue to the Old Lutheran Cemetery on North Lee Street.

Mayor Karen Alexander said she picked up the signed agreement from the UDC late Sunday night on her way home from Beech Mountain, where she was vacationing.

The Salisbury City Council unanimously agreed at its meeting on June 16 to relocate the statue to the Old Lutheran Cemetery on North Lee Street, where other Confederate soldiers are currently buried, with at least $55,000 raised by the original UDC descendants and local historic groups to add site amenities to the new location. The Historic Salisbury Foundation has agreed to serve as the fiduciary agent to oversee those funds.

The next step will involve the city hiring a contractor to estimate the total cost and timeframe with hopes to have it relocated as quickly as possible, which is the desire of both the community and the UDC, Alexander said.

The agreement was mailed to the UDC on Wednesday, and the chapter signed five days before the deadline of June 26.

Alexander said these efforts included a long process, but she’s grateful for all those involved who came together to come to a resolution in a lawful and peaceful way, which she adds “speaks volumes to our community.”

SALISBURY — A Kannapolis man was arrested Friday for a felony charge of assault by strangulation after allegedly strangling a... read more