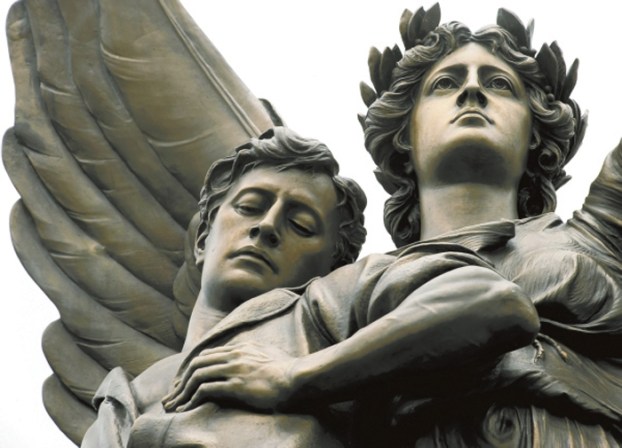 The Confederate Memorial statue of Fame, the winged muse holding a fallen soldier, was dedicated in 1909 by the Hoke Chapter of the United Daughters of the Confederacy. It was a fundraising project that was a decade in the making. Photo by Jon C. Lakey, Salisbury Post.

Efforts in recent weeks to address the conundrum of the Confederate monument have brought out the worst in at least some City Council members, with none standing up strongly enough to keep the body acting according to “best practices.”

They have sunk to a new low. Open-meeting standards have been ignored, another state general statute is being violated and a local standard procedure is being shunned. In its “original agreement,” the city generously purports to resolve all conflicts about the monument, its history and legal placement, “in the best interest of all the citizens of Salisbury and Rowan County.” What pomposity!

First, let’s examine City Council’s failure to provide public notice of the actions they intended to undertake at their meetings, which should be posted at least 48 hours in advance on their “minutes and agendas” webpage. Notice of a 6 p.m. meeting was public noticed for June 16. However, it turned out that the meeting began at 4 p.m., and that was not posted in advance. The agenda stated simply, “Council to discuss the Confederate monument Fame.” We are all aware that council did far more than discuss the monument. They took definitive action on its disposition with no advance notice.

To add insult to injury, the public was supposed to have been able to watch the June 16 council meeting live via several locations referenced on the city’s website. Not knowing of the 4 p.m. start of the meeting, I attempted to watch it beginning at 6 p.m. I spent a considerable length of time watching a blank screen on the salisburync.gov/webcast site. As far as I know, the stream never appeared there. Many hours later, I eventually found it on the city’s Twitter feed, but the signal was glitchy, and I could not make heads or tails of it.

It appears, from Salisbury Post reporting, that discussions began in early June among an unidentified favored few community members, excluding most of the public. As was revealed during the June 16 council meeting, the city attorney was involved in preparing an “agreement” which was sent to Historic Salisbury Foundation, who signed it ahead of the June 16 meeting, and the United Daughters of the Confederacy, who did not until Sunday June 21st. This “agreement” was referenced in one of the resolutions passed by City Council on June 16 as “the original agreement, the terms of which are incorporated into this resolution by reference.” The “original agreement” was not publicly deliberated or passed according to proper procedure until this resolution was adopted on June 16. However, it appears that at least some City Council members must have been involved in its preparation, must have given the city attorney direction and that the agreement was acted upon before being properly adopted.

I can only wonder about specifics, but it is apparent there were deliberations and actions which occurred behind closed doors.

It is also notable that there has never been a public hearing focusing on the issue. We have gabbed about it, people are permitted to comment on anything during the council’s general public comment period, but there hasn’t been a public hearing recently specifically focused on the Confederate monument. It would have been especially useful if done with knowledge of the council’s proposed actions, but we were not part of that decision.

Another venue where a hearing would be necessary would be at the required Historic Property Commission consideration of the city’s plans to alter the monument. I have been in contact with the commission’s staff, and it appears the city is trying to sidestep that standard procedure.

Lastly, the public should be aware that the resolution passed by the city would violate provisions of Chapter 100 of the state’s General Statutes. If the monument is to be relocated, it should be to a location comparable to its original location, and it cannot be moved to a cemetery. I don’t at all understand the city’s desire to violate a State statute.

I am appalled by the city’s lack of transparency and exclusion of the public from their processes. I call upon them to remedy their actions and to conduct themselves in a straightforward and above-board manner. The end never justifies the means.