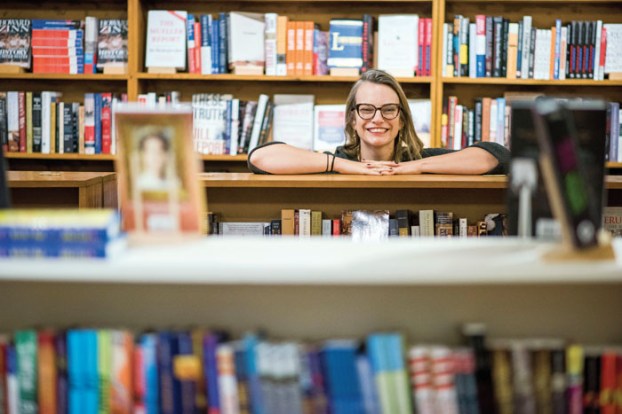 SALISBURY — Alissa Redmond began stocking the Free Little Libraries at county schools with books in May as a way to give back to the community who continued to support her store, South Main Book Company, while many retailers had to close their doors due to COVID-19. Now, she’s continuing that project with a slight change.

Redmond’s stocking of the outdoor bookshelves took a turn recently after she voiced her approval for moving the Confederate statue “Fame” from the intersection of West Innes and North Church streets, which is a short walk from her store. Redmond agrees with the City Council’s assessment that the statue is a public safety issue, citing an incident in May man tied to Confederate groups where shots were fired during a peaceful protest near the statue.

The statue was erected by United Daughters of the Confederacy in 1909.

Redmond’s support for moving “Fame” also resulted in her shop being placed on a list of businesses in Salisbury to boycott according to a Facebook page run by an anonymous individual opposed to moving the statue. But Redmond reported her most profitable day since she purchased the shop in December when the list appeared. And Redmond said the boycott list actually spurred support for her business and others on the list.

Redmond hasn’t been bringing her daughter Margaret to the store with her because she fears for her safety. Margaret often plays and reads in a nook at the front of the store.

The list also drove Redmond to start a fundraising campaign to stock the Little Free Libraries with antiracist and social justice books. The campaign has raised more than $5,000 in five days and she has ordered more than 800 books to fill the libraries.

“It just kind of put a little fire in my belly,” Redmond said. “If somebody wants to come at me and come at my livelihood, then I want to see conditions in Rowan County changing, and the best way I know to bring about change is to educate people through literature.”

Redmond said people asked her about contributing to filling the libraries for a while, and she was thinking about hosting a fundraiser, but recent events pushed her along. She has raised so much already she is starting to think about making donations to schools as well.

“Some teachers have reached out to me about a couple different titles that are really good for promoting social justice issues in a classroom setting,” Redmond said.

Redmond said she wants to show people how easy it is to be an ally in the community.

Redmond said she is bracing herself for backlash, but so far everyone who comes into the store has had positive things to say. She said there are people with Confederate ancestors who have come in to the shop who she has had interesting conversations with.

Maggie Blackwell, a writer and former city councilwoman, has pitched the campaign to National Public Radio’s All Things Considered for consideration as a story.

Blackwell said she is a supporter of the store, and she thinks the people behind the attempted boycott underestimated the people in Salisbury.