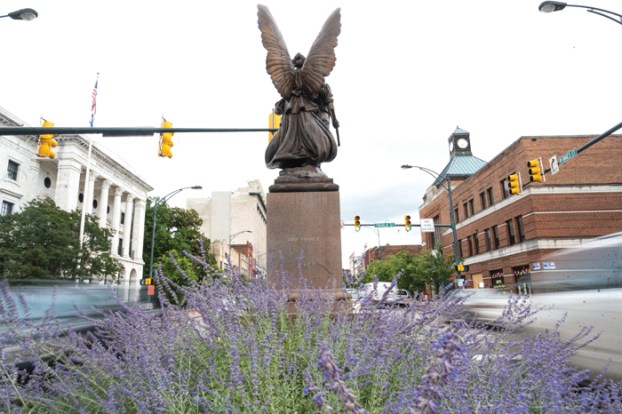 Josh Bergeron / Salisbury Post - Cars drive by ‘Fame.' The Salisbury City Council has voted to relocate the Confederate monument. On the rear of the monument is an inscription that says ‘Deo vindice,’ the national motto of the Confederate states.

SALISBURY — In a letter sent to North Carolina municipalities last week, the North Carolina Division of the Sons of Confederate Veterans said “violent protests and the like” are “doubtful rationale” for removing Confederate monuments under a public safety exception to a 2015 state law.

The letter, which the N.C. Sons of Confederate Veterans provided to media outlets, specifically references Chapter 100 of North Carolina General Statues, which was changed in 2015 with the passage of a law called the Historic Artifact Management and Patriotism Act (S.L. 2015-170). The bill passed with no opposition in the Senate and by a 70-39 count in the state House. All of Rowan County’s members of the House and Senate voted for the bill.

The law specifically prohibits the permanent removal of “objects of remembrance” on public property and only allows the temporary or permanent relocation of monuments in specific instances, including when necessary to preserve an object. The law further says that monuments relocated must be moved to sites of similar “prominence, honor, visibility, availability and access” within the boundaries of the same jurisdiction where it was originally placed. Museums, cemeteries and mausoleums are not an acceptable place for relocation, unless the monument was originally placed in one, the law states.

There are, however, exceptions to the law, including when an “object of remembrance” is owned by a private party, located on public property and the subject of a legal agreement between the owner and the state or a political subdivision of the state such as a city or town. That exception is relevant in the case of Salisbury, which has gotten approval from the owner of “Fame,” the Robert F. Hoke Chapter of the United Daughters of Confederacy, OK for a relocation agreement.

The Salisbury City Council had previously intended to move forward with relocation under a public safety exception, with its approved resolution doing so mentioning an incident where gunshots were fired in the air during a peaceful protest in addition to vandalism other incidents involving the “Fame” in recent history. But the Sons of Confederate Veterans said in its letter that “exterior threats by violent protesters, rioters or vandals” do not count as a public safety exception.

“We sincerely stress that actions taken in derogation of the law because of violent mobs, rioters, protestors or vandals cannot be supported,” the NC Sons of Confederate Veterans said in its letter. “In this case, the law clearly supports the monuments remaining in place. Please understand we wish to work with localities within the state, but we do ask that they abide by the controlling principle in our republic, that if laws passed by a state legislature are ignored, then the mob controls thereby making ineffectual the rule of law.”

Salisbury, though, no longer needs use the public safety exception after the UDC signed the agreement relocating “Fame.” The agreement involves the city of Salisbury paying for the relocation and the Historic Salisbury Foundation overseeing funds raised by private individuals to make improvements to the North Lee Street cemetery.

“As a woman of faith, my heart is full of gratitude to God Almighty, that our city leadership and citizens have chosen a path of mutual respect and respect for the laws of our state and nation to find a peaceful and lawful resolution to this long debated issue,” Mayor Karen Alexander said in a statement announcing the deal had been finalized.

Exactly when “Fame” will be relocated is not clear. On Friday, city staff covered the base of the monument with clear and black plastic to prevent vandalism.

The Sons of Confederate Veterans does not specifically mention Salisbury’s Confederate monument, but it does speak about a decision by Gov. Roy Cooper to remove Confederate monuments after pieces of one near the Capitol were torn down and pulled through the streets. One piece of the monument was hung from a light pole.

A building inspector’s ruling about a monument’s structural condition must be the judge of whether a public safety exception is relevant, the Sons of Confederate Veterans says.

But Cooper in a statement announcing the monument removal said he was “concerned about the dangerous efforts to pull down and carry off large, heavy statues and the strong potential for violent clashes at the site.”

“If the legislature had repealed their 2015 law that puts up legal roadblocks to removal we could have avoided the dangerous incidents of last night,” Cooper said in a social media post. “Monuments to white supremacy don’t belong in places of allegiance, and it’s past time that these painful memorials be moved in a legal, safe way.”