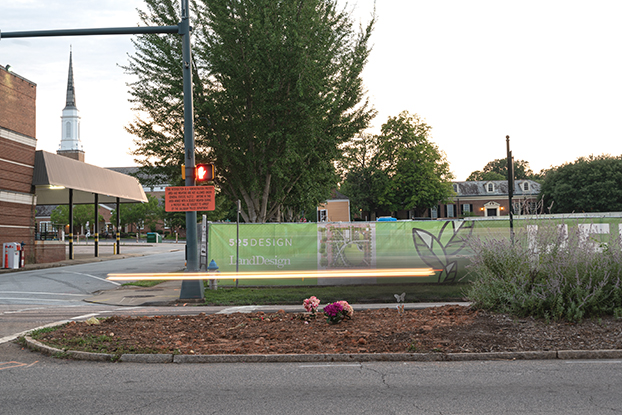 Josh Bergeron / Salisbury Post - A car drives through the intersection of Innes and Church streets Sunday evening in downtown Salisbury in this long exposure photo.

SALISBURY — The layout of West Innes Street won’t change following the removal of the “Fame” Confederate monument, according to the N.C. Department of Transportation.

A reader last week asked whether the median with trees and shrubs would be removed from West Innes Street, a state-maintained road, to make traffic flow easier. Currently the median splits four total lanes of traffic — eastbound on one side and westbound on the other.

“There are no plans to remove the median on which the statue stood,” Ivey said. “The city will restore the area with vegetation consistent with adjacent portions of the median.”

The “Fame” Confederate monument was removed last week by a hired contractor and city crews, with its engraved base and top portion stored in an undisclosed location. Crews lifted most portions of the base with a large crane and hauled them away before jackhammering one remaining piece. The edge of the median where “Fame” once stood now a patch of brown dirt with flowers that passersby have left.

Per an agreement with the Robert F. Hoke Chapter of the United Daughters of the Confederacy, “Fame” will be relocated to a historic cemetery on North Lee Street with Confederate tombstones.

Removing the median was a topic of conversation in 1948 because a group of business people were worried about traffic safety and future growth in Salisbury. A similar debate about traffic safety emerged at other points in the monument’s history, including 1959 and 1964, according to Salisbury Post archives.

What are requirements to run for school board?

Another reader asked about necessary qualifications to run for the Rowan-Salisbury Schools Board of Education.

All three school board seats will appear on the November ballot. The elections will be nonpartisan.

The Rowan County Board of Elections says candidates must meet the following qualifications to serve:

• Be 21 years of age by the time he or she takes office.
• Be a qualified voter of the district for which he or she is running.
• Pay a $5 filing fee.
• Cannot be an employee of the Rowan-Salisbury Board of Education while serving on the school board.
• Cannot hold another elected office at the same time as school board.

When visit the Rowan County Board of Elections, candidates will need to organize a campaign committee and fill out paperwork declaring their candidacy.

If there are a number of candidates who arrive at the Rowan County Board of Elections at the same time, staff say they will help two at a time in order to observe Centers for Disease Control and Prevention guidelines about COVID-19.

Filing for the Rowan-Salisbury Board of Education will end at noon on Aug. 14.

By Shavonne Potts shavonne.potts@salisburypost.com SALISBURY — For more than 120 days, the N.C. National Guard has been on duty supporting... read more