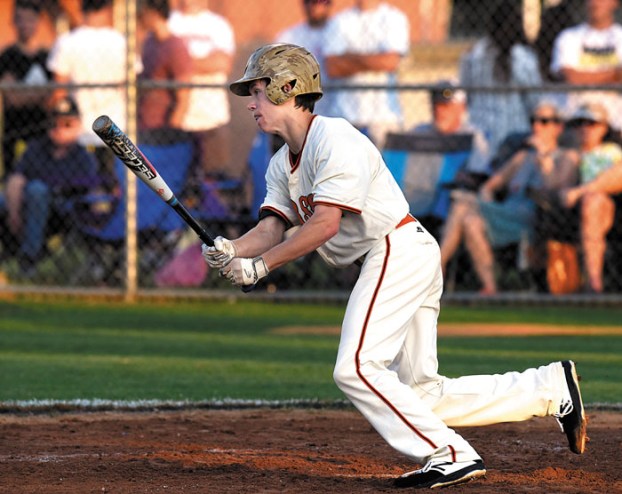 Carson's Dylan Driver gets a base hit during a game last season. Photo by Wayne Hinshaw, for the Salisbury Post

SALISBURY — Carson’s Dylan Driver was on his way to contending for the Mark Norris Memorial Rowan County Player of the Year award when his junior season as a Cougar was shut down after six games.

Driver’s last 11 trips to the plate for Carson against reasonably good competition were offensive perfection — eight hits and three walks.

His last at-bat of the high school season provided the ultimate moment for a hitter of baseballs  — a grand slam.

He started out the 2020 season 1-for-6, but then he went a ridiculous 11-for-13 with 10 RBIs over the next four games. He was one of the nation’s leading hitters at .632 after his monstrous night against Mount Pleasant that produced a tidy 3-3-3-5 boxscore. But then it was over.

“We knew before that last game that there was a chance it might be the last one,” Driver said. “It’s a good memory now, hitting a grand slam on my last at-bat of the season, but I hated it for our seniors when it ended so early.”

Driver had anticipated playing American Legion ball this summer. He had looked forward to the excitement and the crowds at Newman Park.

With a 25-fan limit inside the park, he’s had to settle for Newman without the cheers, but he’s making the best of the American Legion substitute — NC3 baseball.

“I’ve wanted to be a baseball player since I was 5 years old and I’ve had the goal of being a college player since middle school,” Driver said. “I’ve learned a lot this summer. I’ve been learning since the first day I came out here.”

Driver doesn’t have ideal size (5-foot-10, 160 pounds), but he’s emerging as one of Rowan’s more talented players. He has a fine arm and excellent speed. He can beat out a bunt — or he can smoke the ball over the wall. His exceptional bat speed gives him unexpected power for someone who weighs 160. He looks like a guy outfielders want to play shallow, but he’s burned some of them.

“I didn’t know much about him, so he’s been a great surprise this summer,” Rowan coach Jim Gantt said. “He’s respectful toward the coaches and to the game of baseball. He’s eager to learn and he has multiple tools. He has the arm and speed to be a really good outfielder. At the plate, he’s got bat speed and some power.”

The key for Driver, going forward, may be his right arm. His promising future as a pitcher is just starting to be unlocked. He has a chance to be a two-way player in college.

High school teams play a maximum of three times a week and can ride three or four hurlers. Driver has never thrown a pitch for Carson’s varsity.

But NC3 baseball has meant stretches of five games in five days and includes doubleheaders, so almost every healthy arm is pressed into service. Driver has one of the best arms on the team.

“The last time I threw with a radar gun was six or seven months ago with a travel team (the Lake Norman Bulldogs),” Driver said. “I threw 85.”

He was timed in the 60-yard dash in 6.9 seconds at a Western Carolina camp. That’s the average speed for an MLB player, and he’s likely to get swifter in the years ahead. As far as wheels, Driver and Rowan’s center fielder, CP Pyle, are virtually identical.

“We get asked all the time which one of us is faster, and I can’t tell you how many times we’ve raced, and it’s always neck-and-neck,” Driver said.  “The one athletic skill that I’ve always had is being quick. CP is shorter than me, but he can really move.”

While Pyle is famously fast because of his work as a Carson running back and defensive back for the football team, Driver has always turned down requests to play football for the Cougars. He tried basketball for two years in middle school, but he’s basically been committed to baseball since his first day on a diamond.

As a freshman at Carson, Driver batted just .190 for the jayvee team, but he was 5-3 with a nice ERA as a pitcher.

“My pitching was way ahead of my hitting back then,” Driver said.

As a sophomore in 2019, he didn’t get to pitch on a Carson team that had Cole Hales and Deacon Wike on the mound, but he won the right-field job. He was one of Carson’s most consistent hitters in a playoff run. He had five hits in the team’s last four games, including three battles in the regional championship series with Marvin Ridge. Driver hit .333 for the season and was 7-for-7 on steal attempts.

As a junior, he didn’t figure into Carson’s pitching plans — the Cougars were counting on Driver’s NC3 teammates Logan Rogers and Ryan Street to handle most of the workload — but then his bat exploded.

Driver has been focusing on his pitching more this summer and hasn’t always been in the batting order, but he’s had at least one RBI in every game he’s been in the lineup. He had two hits, including a triple, on opening night against Lexington-Davidson. In a game against Randolph County, he went to the plate four times and had two hits and two walks. There was a stretch of four games when he didn’t swing, but then he homered and doubled in a win against  Greensboro.

“I’d been struggling a little bit,” Driver said. “I got some hits, but they were infield hits. That homer against Greensboro, it felt good to square a ball up again. I got locked in during that game.”

In Sunday’s 3-2 loss to Lexington-Davidson, Driver’s double was the only extra-base hit of the game. He’s making a case to be in the lineup somewhere any time he’s not on the mound. He’s 9-for-16 for the season (.563) with eight RBIs.

On the bump, there was a rough start against Mocksville — seven runs, all unearned, following an error.

“The biggest challenge for me as far as pitching is keeping my head on straight if something goes wrong,” Driver said. “I’m getting better at it.”

He throws four pitches. There’s a four-seam fastball that has upward hop to it. That’s a swing-and-miss pitch for him. There’s also a two-seam fastball that moves more and can get him a ground ball in a double-play situation. He’s replaced his curveball with a slider this summer. He says the slider has been harder for hitters to read. He also mixes in occasional changeups.

“I love pitching because you’re in control of the game and can have a huge impact on the outcome,” Driver said. “When I pitch, I get this adrenaline rush that’s different from when I play the outfield.”

“He’s got a lot of potential as a pitcher,” Gantt said. “He spins it well.”

While he’s experienced success this summer, Driver isn’t taking anything for granted. He’s still one of the first to arrive at the park for games and practices and among the last to leave.

“I try to get in the cages and get as many swings as I can,” Driver said. “I know if I want to play past high school, I have to keep putting in the extra time.”