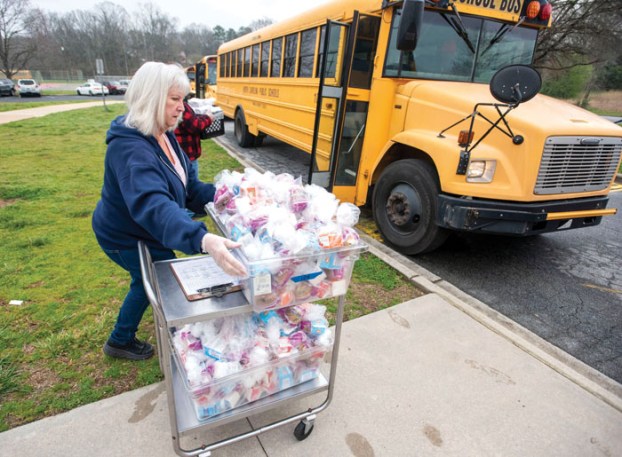 SALISBURY POST FILE PHOTO - Knox Middle School's Technology Facilitator Becca Glenn pushes out a cart of food for pickup in March on the first day that Rowan Salisbury Schools implemented food distribution to students during an initial shutdown because of COVID-19.

RSS students will eat free when they go back to school

A state waiver will allow meals to be given to all students through Aug. 31, and if that waiver is not extended, another waiver from the U.S. Department of Agriculture will allow the district to keep going with no issue.

District Nutrition Director Lisa Altmann has repeatedly described the ability to feed all kids as a dream for people who work in school nutrition. The district has been delivering meals free directly to students at home via buses since March, when schools were ordered to close, and has continued to deliver tens of thousands of meals each week through the summer.

Altmann said whether meals will be eaten in classes or cafeterias is up in the air and may be decided on a school-by-school basis. She said she believes high school students will understand the changes more easily than elementary school students, and the district is putting together its final plans.

“I think that we’re going in the right direction by meeting with the school administrators and getting their input,” Altmann said.

The district has some new equipment as well to help with a new world of school-cooked meals. Heat-sealing machines will allow workers to vacuum seal entire meals so they can be tailored by students. A salad bowl with lettuce could be sealed, and all of the add-ins such as corn and ham can be sealed in separate pockets of the same package. Students will now be able to order meals from their tablets as well.

“I think the kids are going to enjoy the way that it’s laid out,” Altmann said, adding it will help distribute, pending Board of Education approval, hot items like nacho trays and the ever-popular Salisbury Dippers.

Students will be given shelf-stable meals to take home when they are not in school depending on whether they are assigned A or B schedules under the district’s model.

Karen Hetrick is the manager at North Elementary School, and she pointed to the success of universal breakfast in the school. Students arrive, pick up breakfast from carts in the school’s main lobby and eat breakfast during the beginning of class. Hetrick said the changed cause the department’s numbers to jump 30%.

Hetrick said she believes in the importance of all students starting the day with a meal so they can be ready to learn.

Altmann said the district will now be able to feed all students lunch, but exactly what that will look like at each school has not be decided.

Carson High School Nutrition Manager Heather Strickland agreed the setup is a dream and that the service is especially important to take some pressure off families who are facing economic hardship due to COVID-19 such as losing jobs, hours or other income. Carson is the largest school in the district, and drivers typically see the same students and parents picking up meals each day.

“It’s a win for all economic backgrounds and for us employees to know that we are really providing something,” Strickland said.

Strickland said she started working at the elementary school level and found there are more reasons why students may not take school-prepared meals in high school, like wanting to eat healthy. But she said they may not realize the schools offer healthy food and can even accommodate dietary restrictions such as gluten and dairy intolerance.

Hetrick said she is ready for the kids to be back in school and for all her staff to be back as well. Her main concern is that all of the students get fed.

Sierra Davis, of Salisbury, was named to the President’s list at Sherman College of Chiropractic. read more