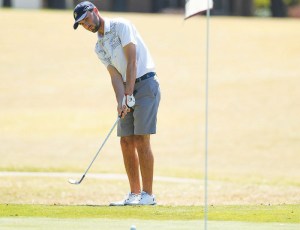 Staff report
CAMDEN, S.C. — In the Carolinas Four-Ball Championship on Friday, Nick Lyerly (East Rowan) and partner Zack Swanson, were qualifying medalists.
The UNC Greensboro golfers teamed for a 15-under 55 in the second round and 23-under for the two stroke-play qualifying rounds.
Lyerly shot 59 himself.
The team shattered the previous tournament records for 18 holes and 36 holes.
Tied for fifth in stroke play qualifying were former Cannon School teammates Michael Childress and Lansdon Robbins. They were 12-under.
Match play — Round of 32 and Round of 16 —is scheduled for Saturday. The field will be trimmed to eight teams after Saturday.
You Might Like