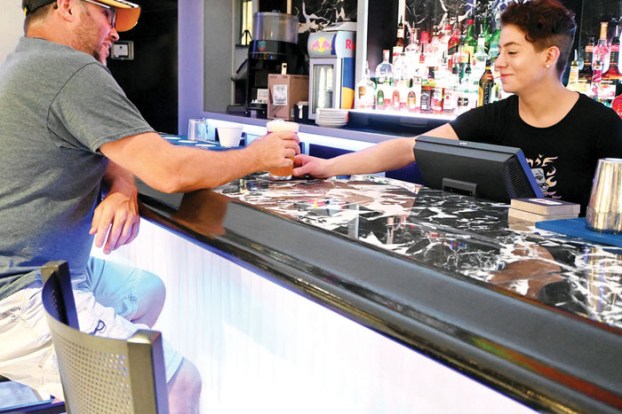 Natalie Anderson / Salisbury Post — DJ's Restaurant, located at 1502 W. Innes St., serves customers until midnight on weekdays and 2 a.m. on Fridays and Saturdays. Owner Louie Mourouzidis said the recent executive order signed by Gov. Roy Cooper to halt the sale of alcohol after 11 p.m. at restaurants will hurt his restaurant as alcohol sales are significant sources of revenue.

SALISBURY — The governor’s order to halt the sale of alcohol after 11 p.m. is effective Friday. And while a significant countywide impact on the economy isn’t anticipated, it will hurt one local restaurant already operating at 50% capacity.

Gov. Roy Cooper on Tuesday signed an executive order curbing alcohol sales at restaurants after 11 p.m. in an effort to discourage late-night gatherings, particularly as cases continue to rise among young people and college students return to school soon. The order doesn’t apply to grocery stores or convenience stores that sell alcohol.

James Meacham, the head of the county’s tourism development authority, said the county isn’t anticipating a large financial impact across the county, but it will impact restaurants with bars, adding that those restaurants have been “filling gaps” in the hospitality industry since bars haven’t been able to reopen yet.

Meacham said the pandemic has caused some restaurants to close earlier than they did before the pandemic, with 10 p.m. being the current typical time local restaurants close.

Nonetheless, halting the sale of alcohol after 11 p.m. will be “another financial challenge” for the county in its economic recovery. And one restaurant owner, in particular, said the order will hurt his business.

Louie Mourouzidis, owner of DJ’s Restaurant, said alcohol sales, particularly on the weekends, provide significant revenue for the restaurant. He said the order doesn’t make sense and that it was “ridiculous,” particularly after he recently spent $100,000 in renovations and had to shut down for three months due to the pandemic. That’s on top of the fact that he’s only allowed to operate at 50% capacity. And with the reduced capacity, he said, restaurant owners are “lucky” if they break even with sales.

DJ’s, located at 1502 W. Innes St., is open until midnight on weekdays and until 2 a.m. on Fridays and Saturdays. The restaurant also provides live music and entertainment, with some musicians from across the nation. July 25 was the first weekend since the pandemic that the restaurant had live music, and Mourouzidis said “it went excellent.” Currently, he can allow 90 customers outside and 85 inside.

But Mourouzidis said the alcohol order “makes no sense” because the “virus doesn’t recognize if it’s 11 or 10:30 p.m.”

For now, it’s “business as usual,” he said, until he figures out how the order will be implemented and what effect it will have on the restaurant.

Go Burrito is another restaurant that has served alcohol after 11 p.m. Owner Mikey Wetzel, who recently opened a new restaurant on the lake, did not immediately respond to a Post request.

The order stopping some alcohol sales comes as active cases in Rowan County largely hover in the same range but as people have increasingly died outside of nursing homes.

An additional person not associated with a congregate care facility on Wednesday was reported dead after testing positive for COVID-19, bringing the total to 49 deaths. All but 12 deaths have come from congregate care facilities, with 21 from the Citadel, 15 from the N.C. State Veterans Home and one death at Liberty Commons. The average age among the deceased is 81.

Active hospitalizations attributed to COVID-19 were at 12 on Wednesday.

In other local COVID-19 statistics: