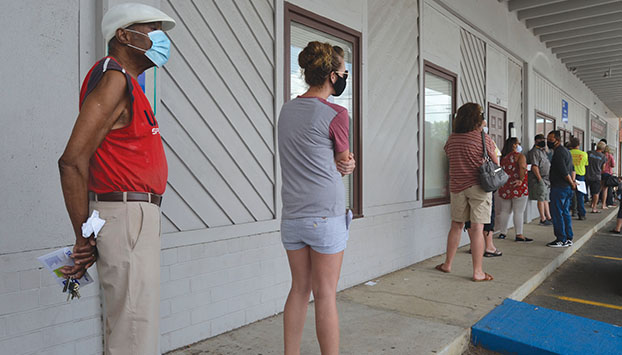 David Heath, left, and Whitney Singleton, wait in line at the N.C. License Plate Agency to renew their license plates in what they planned for to be a long wait. Shavonne Potts/Salisbury Post

SALISBURY  — Lines at the license plate office on East Kerr Street are as long as they’ve ever been, but one thing is different about waiting for service during COVID-19.

On any given weekday, the line extends out of the building, onto the sidewalk and, at times, into parking lot. Those waiting for service can do so for hours in the summer heat. That’s something Whitney Singleton, who was among the people waiting on Thursday, expected, she said.

“I knew it was going to be crazy here regardless,” Singleton said.

Singleton, who was there to renew her license plate, came with plenty of hand sanitizer and wearing a mask. Though she knew lines would be long, particularly because it was the end of the month, she said it was something she needed to get done. Singleton said she knew she could complete the process online, but she prefers the face-to-face interaction.

A note on the window informed those waiting in line that it would likely take two to three hours because the office is short-staff due to sick employees.

“You may visit a different location if you don’t wish to wait. Sorry for the inconvenience. We hope to be better staffed when employees are able to return to work,” the note states. 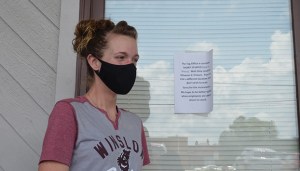 Whitney Singleton, waits in line at the N.C. License Plate Agency to renew their license plates in what they planned for to be a long wait. The sign posted on the window notifies customers of a two or more hour long wait. Shavonne Potts/Salisbury Post

Edith Cruz brought her children with her to the office to renew her license plate. The family stopped by the office in the early afternoon expecting to see the lines even longer. The family, like many others in line, wore masks.

David Heath said he always renews his license plate in person and chose Thursday afternoon because he was hoping to avoid long lines.

Heath donned a mask and said he didn’t know it would take so long.

According to John Brockwell, a communications officer with the Division of Motor Vehicles License and Theft Bureau, each license plate office is operated by individual business contractors and the number of people allowed in the building at one time is at the discretion of each individual operator.

Vehicle registrations can be renewed online via payments.ncdot.gov