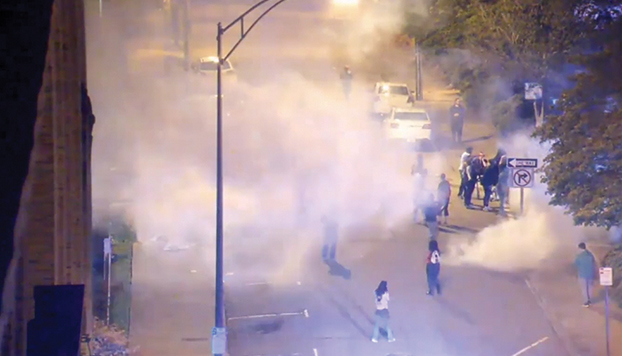 Screenshot of Salisbury Police video This screenshot shows tear gas filling the air at the intersection of Church and Council streets on June 1.

The Salisbury City Council’s agenda item Tuesday about banning chemical agents was divisive. But for any division it caused, Tuesday’s discussion was equally as informative for the public.

Even as someone who photographed and wrote about the protests that sparked the deployment of tear gas, Police Chief Jerry Stokes’ presentation made public previously unreported information.

Repeatedly, Stokes has shown he’s interested and willing to report to the public details of major events for the Salisbury Police Department. It was true Tuesday when he discussed the events of June 1 as well as in incidents like a mass shooting earlier this year at Thelma’s Down Home Cooking in the West End Plaza and the killing of Ferguson Laurent during the service of a no-knock warrant by police.

Personally, his presentation revealed the delicate nature of the situation with which officers dealt and a glimpse into the series of decisions that had to be made in rapid succession.

In his presentation, Stokes said there was an armed man in a crowd of people who were protesting in the shadow of the Plaza — something that’s not allowed by state laws. The presentation also revealed to me a group of men across the street from the Post in military-style clothing were not law enforcement officers. The men appeared to be armed and came to the scene with a dog.

It was enlightening to watch the same moments I witnessed from an aerial view — as the crowd saw two white men standing on the steps of St. John’s Lutheran Church, assume that it was the man who shot two days prior, begin to move toward them and as police escorted the men away from the scene while the crowd chased.

I also spotted myself, confronted by two men — both of whom assumed the crowd was pointing to me, standing in the same general direction. They were pulled away by a woman whose name I didn’t get.

To understand the police department’s approach to the protests that night, it’s important to hear or read statments from Stokes like the following: “Here are folks that decided they wanted to express themselves by going out into the travel lane and laying down in traffic. … We would have been completely within our authority to go out and arrest every one of those folks. We didn’t. We understood what their intention was, and what we intended to do was facilitate that expression.”

Using comments from social media, Stokes also said during the meeting there were threats toward the Rowan County Detention Center. And in a delicate situation in which a couple hundred protesters were walking together toward the jail, it’s understandable that police took the threat seriously.

While I watched three tear gas canisters deployed that night, Stokes said there were three deployed. And the decision to deploy those canisters was the focal point of Tuesday’s debate.

“What I really want us to discuss is as a council the kind of a tone that we are going to set for our community in terms of what we are willing to let our residents be exposed to,” Heggins said.

She wanted the council to consider things like halting the purchase of items like tear gas and examining policies specific to use of force during riots and protests. And she wanted police to so-called agitators out of what might otherwise be a peaceful protest.

The council’s debate about the topic was divisive by any measure, complete with conflicts between council members. It revealed how debate can become misconstrued. Her proposition was interpreted as an attack on the police department. And there were multiple moments when debate morphed into whether council members “supported” the police department.

There also were mentions of defunding the police — a national cry that’s simultaneously been interpreted as taking resources away from a critical public safety institution as well as redirecting funding to places that can better deal with issues of mental health and items that may not require law enforcement.

But Tuesday’s debate was not a negative development in the history of this council, which has entered its second full term together by diving head first into some of the most difficult topics a council could consider. Protests in late May and June brought tough moments for the city, and officials should discuss and review the incident. Additionally, Tuesday’s meeting served as informative background for voters about a moment that shaped public discourse in the weeks immediately afterward.

Even when there’s no resolution, it’s good to have tough debates about difficult issues as long as it doesn’t irreperably harm future civil conversation.

What did I do? What did we do? Let us go back about a year when several patriotic citizens appeared... read more