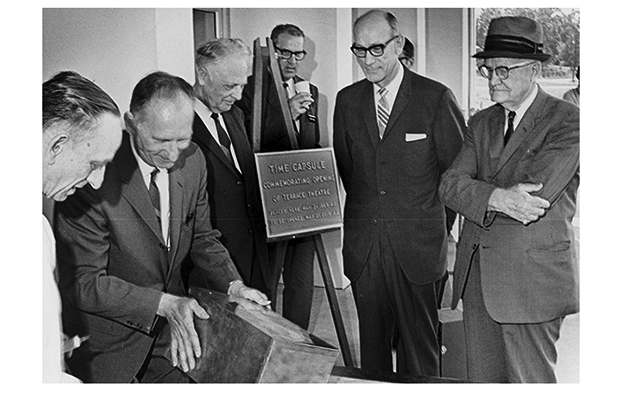 This image, provided by Mike Cline, shows the burying of the time capsule in 1969.

The opening of the Terrace Theatre in Salisbury was a major moment for the city.

After more than 40 years, Salisbury finally had a brand new theater. It wasn’t a remodeled building or a drive-in. Instead, as a 1969 Salisbury Post story noted, it was “an honest-to-goodness, completely new theatre built from the ground up.”

On the night of its opening, Mayor Paul Bernhardt cut a ribbon of film before a line of people excited to be the first into the building entered at 8 p.m. on May 29, 1969. The estimated attendance on opening night was 500.

To commemorate the moment in Salisbury’s history, a time capsule was buried at the theater. It was buried right outside of the box office, says Mike Cline, who has extensively studied local theaters and managed the Terrace for several years.

Raised letters on a plaque over the time capsule said it should not be opened until May 21, 2019. Then, it would provide a small look into life 50 years prior.

But the Terrace Theatre is no longer. Neither is the Towne Mall, where it once sat. Both were demolished in the late 1990s to make way for Towne Creek Commons, which is off of East Innes Street near Interstate 85. Mostly, the development contains restaurants.

A reader named Doug Bailey, who now lives in Texas, wrote to ask what happened to the time capsule. Was it moved, saved, opened, relocated or reburied? Bailey said he was a child at the time of its burial and was looking forward to seeing what had been placed in it “to remind us of years past.”

The answer is an unfortunate one, Cline said. Without any fanfare, the capsule was dug up in 1997 while workers were making way for Towne Creek Commons. Inside, they found water had seeped in and damaged the contents.

A story by Mark Wineka said workers lifted out a copper box and found a yellow, plastic garbage bag in which there was a melted and fused-together soggy blob that was crumbly to the touch. Some items were recognizable, including a reel of tape that was thought to be a newscast. There were two pennies as well. Some papers were recognizable, including messages from the Salisbury Jaycees and city officials. Cline said the damaged papers would have included an edition of that day’s Salisbury Post, too.

A 1994 column by Rose Post said the copper box included a list of the top 10 songs of the day and a book full of signatures that included Jean Sides, who said she would turn 92 in 2019. She was asked to sign her name by the late Rep. Eugene McCombs.

“They thought it would be unusual when they opened it up to find out a lady was building houses way back then,” Sides said.

Cline said other items placed into the time capsule included movie tickets, a poster, photographs, a popcorn box and a cup. There was an array of other documents inside, including potentially a phone book and a map.

But there were some insightful contents in the soggy blob, including a message under the Salisbury-Rowan Merchants Association letterhead making predictions for the economy in 2019. Just the conclusion of the message was discernible.

“Salisbury and Rowan County, in the year 2019, or around that date, will be the finest place to live with the friendliest people anywhere. Of this, I am positive,” the conclusion stated.

Sylvia Wiseman, the Post’s entertainment editor at the time, also included a prediction in the time capsule that was discernible and in the best shape when the copper box was unearthed. And what a prediction she made.

Maybe, she said, those of us living in the 21st century would return to the past — 100 or 150 years ago — when “entertainment was entertaining.”

Could any of them have predicted our current moment in 2020? And what predictions or questions might people make today about Salisbury and Rowan County in 50 years?

By Shavonne Potts shavonne.potts@salisburypost.com SALISBURY — On Wednesday, the first scheduled patients will walk through the glass doors of the... read more