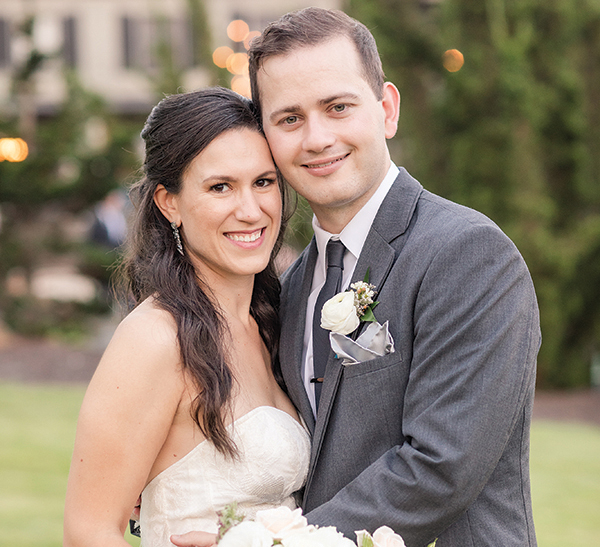 Emily Blythe Mancil and Collin Rhys Griffiths of Greenville, S.C., were united in marriage July 3, 2020 at Hotel Domestique in Travelers Rest, S.C.  The bride is the daughter of Dr. and Mrs. Gary Mancil of Salisbury.  A 2006 graduate of East Rowan High School, Emily received a Bachelor of Science degree in Psychology from Appalachian State University.  She received both Masters and Doctoral degrees from the University of South Carolina at Columbia in School Psychology.  Dr. Mancil is employed by the Anderson County School System in Anderson, S.C.  The groom is the son of Mr. & Mrs. Cefn Griffiths of Solon, Ohio.  A 2009 graduate of Solon High School, Mr. Griffiths graduated from The Ohio State University with a Bachelor of Science degree in Mechanical Engineering, additionally interning with Swagelok in Solon, Ohio, and later as a Project Engineer with Nestle USA.  Mr. Griffiths is currently employed as a Product Technology Engineer with Sealed Air in Greenville, S.C.

Despite the challenges presented by the pandemic of 2020, Emily and Collin were committed to marry this year.  Months after having finalized virtually all the details, they set about the task of re-planning their wedding.  They reduced the guest list to only their wedding party, immediate family and a very few local friends.  They adjusted their wedding date by just a few days.  The wedding venue was changed from a large site overlooking the Reedy River in downtown Greenville to an intimate small boutique hotel reminiscent of a European country villa and located between Greenville and Asheville – the perfect setting in which to hold an outdoor wedding and reception.

The early evening ceremony took place on a courtyard which was beautifully decorated with fresh flowers arranged to highlight the central reflecting pool, featuring water cascades.  The outdoor setting was surrounded by a backdrop of lovely views of the surrounding mountains.  The bride was escorted by her parents, with a string duet playing in the background.  Attending were three Matrons of Honor and best friends since childhood, Kelsey Ketner Brown of High Point, Carrie Misenheimer Holz of Raleigh and Jordon Lyerly of Huntersville.  Attending bridesmaids were the bride’s sister-in law, Charlotte Brown Mancil of Apex and the groom’s sister, Kelsey Griffiths of Los Angeles, Calif.
The groom chose his brother, Jeff Griffiths of Hyde Park, Mass., as his Best Man.  Groomsmen included the bride’s two brothers, Will Mancil of Apex and Ethan Mancil of Durham and Nick Bessner of Washington, D.C.  Rev. Terumi Culmer officiated.

A reception followed on the courtyard, featuring seating under the stars along with an outstanding menu of unique selections prepared on site by Restaurant 17 of Hotel Domestique.  Live music, dancing and a heartfelt send-off for the couple through a double line of special family and friends waving festive sparklers completed the memorable summer evening event.  The couple enjoyed a relaxing honeymoon in Hilton Head, S.C., and rescheduled their original wedding trip plans to Africa for a future time.  Dr. Emily and Mr. Collin Griffiths reside in downtown Greenville, S.C. where they met.