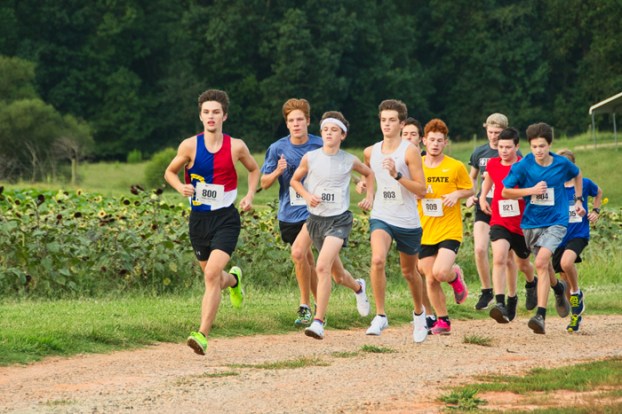 Cross country: Runners happy for a chance to compete

MOUNT ULLA — The high school cross country season has been rudely shoved to a November to January time frame for this school year, but South Rowan senior Noah Julian isn’t one for sitting around.

Julian did most of the organizing for the Rowan County High School Runners 5K for United Way that restored the fun and competition of cross country months ahead of schedule.

Runners couldn’t compete as high school squads, only as individuals, but 21 boys and 18 girls paid their $5 registration fee and showed up to run at Patterson Farm on Saturday morning.

COVID-19 locked down the track and field season last spring — making it the first spring without the excitement of a Rowan County Championship meet in 50 years.

Then most track and cross country competitions became pandemic casualties over the course of a long, empty summer.

But there have been a few races here and there with restrictions, and Julian, Rowan Country cross country runner of the year in 2018 and 2019, was able to compete in one in Winston-Salem.

“There was a staggered start and a cap on the number of runners in a wave, but it was a race,” Julian said. “It got me thinking that if I could find a venue and if I could get enough help, I could organize a race in Rowan County.”

A future engineer with a head for design, he went to work on that project.

Part of his motivation was this is the sort of initiative and leadership that will look great on his college transcript.

The other part of his motivation was a desire to bring teammates and adversaries from other schools together. All of them have been suffering through the same series of slammed doors, especially the juniors and seniors. They’ve been watching what’s left of their high school careers steadily slip away like sand through an hour glass.

And November and that first chilly day of official cross country practice was still a very long way off. Too far off.

“This was a chance to get everyone together and give them a look at exactly where they stand,” Julian said.

Julian didn’t have to look far to find the assistance he needed. His parents, Scott and Rebekah,  coach South Rowan’s cross country teams.

David Freeze and the Salisbury Rowan Runners were also eager to lend a hand. They’d handle the timing for the race in a professional manner and some would be active participants in helping the race run smoothly on a course foreign to the runners.

It was a course featuring packed gravel, dirt and grass. There were two major loops and runners finished at a different point than the one from which they started.

“It’s a true cross country course,” Freeze said. “No pavement. Sand, some mud and rutted roads, plus some hills.”

“A good course,” Julian added. “But it’s not the sort of course where you’re going to be shooting for a P.R.”

Freeze did the tough advance work with a bush hog, clearing obstacles and carving a pathway. Julian got to help design the course. Flags were planted, mapping a route. Spotters from Salisbury Rowan Runners were stationed at strategic points to make sure no one took a wrong turn.

There were wet spots on the course, but the Saturday morning weather, with low humidity, couldn’t have been more ideal for running.

“Mentally I was right there, ready to go, and my legs felt great,” Julian said. “But some of us had eaten too much the night before and  had way too much dairy. Cheesy lasagna and a milk shake, those were mistakes I won’t make again.”

He was able to hold off his younger brother, Eli, a South freshman who has a huge future ahead of him. Noah finished three seconds ahead of Eli.

The competition between the brothers should be compelling this winter.

South students Landon Cromer (third), Nolan Miller (sixth) and freshman Grayson Cromer (seventh) were strong, a sign that the Raiders should be a team to be reckoned with when the season officially arrives and they can all wear red and black.

“We’ll have a good team,” Noah said. “We might get a few guys from the soccer team now that their season has been pushed back until January.”

East Rowan’s Thomas Ferguson (fourth) and Brayden Self (fifth) and Carson’s TJ Jones (eighth) were the other top male runners on Saturday.

Noah said a countywide AAU team is being formed to help keep runners from all the schools sharp this fall.

She was the female winner on Saturday in 21:55.

“I saw her finish and she was running great,” Julian said. “She ran a really good race.”

A very young runner with no high school experience but lots of races under her belt, Emberleigh Pauley-Brown, finished second on Saturday in 22:34.

“South will have a really big girls team this year,” Julian said. “Probably double the size of the boys team — 15 or 16 girls.”

The runners raised $362 for United Way.

The NCHSAA made some announcements concerning postseason plans on Tuesday.

The date for the 2A cross country state championships is expected to be Jan. 23, with the regional on Jan. 16.

“That’s definitely going to be something different because it might be 30 degrees,” Julian said. “I hate when it’s super-cold and windy, but I I hate high humidity even more.”

January 24 is a long way off, but Saturday’s race made it feel a little closer.