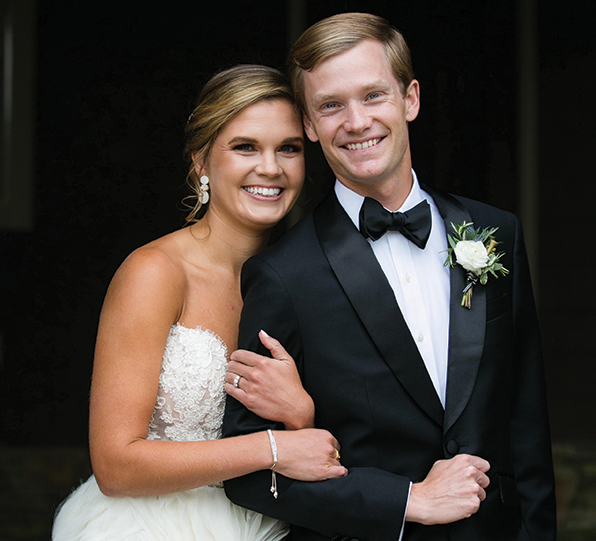 Katelyn Shull Storey and Alex Thomas Lee were united in marriage on September 19, 2020 at The Arbors Events in Cleveland.
The Reverend Doctor Mark Conforti officiated the 5 p.m. ceremony, which was followed by a reception at The Arbors Events.
The bride was escorted by her father, Andy Storey, and attended by her Maid of Honor, Allie Billings of Salisbury. Her bridesmaids included Allison Burns of Pinehurst and Abby Lee of Salisbury, sisters of the groom, Sallie Kate Meyerhoeffer and Katie Carmichael of Salisbury, and Sarah Seifert of London, England.
Alex Nianouris of Raleigh served as best man. Standing in as groomsmen were Spencer Storey, brother of the bride, of Gainesville, Fla., Evan Burns, brother-in-law of the groom, of Pinehurst, Blake Brewer and Tyler Moss, both of Raleigh, and DJ Colson of Charlotte.
Caroline Graham of Salisbury served as Lector and Brooke Smith of Salisbury served as Program Attendant.
Katelyn is the daughter of Diana and Andy Storey of Salisbury and the granddaughter of Ted Spencer of Lawsonville, Nancy Spencer of Stuart, VA, and Shully and Ned Storey of Salisbury. A 2013 graduate of Salisbury High School, Katelyn graduated with Distinction in 2017 from the University of North Carolina at Chapel Hill with a Bachelor of Arts in Biology with a Chemistry minor and a Bachelor of Science in Business Administration. She is currently pursuing a Doctor of Dental Medicine in Bradenton, Fla.
Alex is the son of Melody and Brian Lee of Salisbury, and the grandson of Mr. Donald Lee and the late Jane Lee of Charlotte, and the late Reverend and Mrs. Thomas Dekle. Alex graduated cum laude in 2016 from Catawba College with a Bachelor of Arts in Economics and Finance, with a Mathematics minor.  He is currently employed by Allscripts.
The couple will honeymoon later this year in O’ahu, Hawaii.  Katelyn and Alex are presently making their home in Bradenton, Fla.