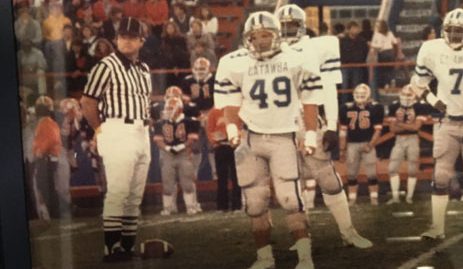 Joe Crapster wore the No. 41 jersey at South Rowan, but it was not available at Catawba, so he went with No. 48. Submitted photo

That seems like at least a small miracle because Crapster knocked the stuffing out of a lot of people in his linebacking days at South Rowan High and Catawba College. He survived hundreds of violent gridiron collisions.

Crapster is now an executive. He’s held positions of increasing responsibility for Duke Power/Duke Energy for more than 30 years. He was working for Duke Power while he was still a Catawba student.

In his playing days, Crapster had that clean-cut, boy-next-door appearance. He looked like the guy you wanted to take your daughter to the prom or mow your grass. That proved to be an effective disguise for a punishing hit-man. 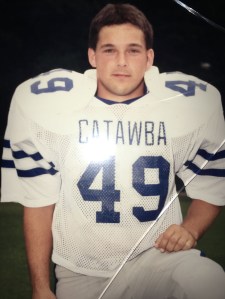 He played football with hair on fire, with what sportswriters of past generations liked to call “reckless abandon.” He was fearlessly aggressive in a feverish, seven-year assault on ballcarriers and quarterbacks. Crapster was loved by teammates and inspired them. He was respected —maybe even feared — by opponents.

He was a 205-pound athlete at his heaviest at Catawba, but he attacked like a 245-pound sledgehammer.

“Football was just something that I loved,” Crapster said. “I was always that undersized linebacker, 5-foot-10, 175 pounds when I played varsity as a sophomore for South Rowan, and maybe 195 as a senior. But size isn’t as important as speed in football. Even that 240-pound running back, if you hit him hard enough and hit him with proper technique, he falls. Mostly, you’ve gotta be fast and I tried to be fast.”

In 1984, as a Catawba sophomore on a struggling team, Crapster would break the school record for tackles (at that time) with 130.

His football career actually started later than you might think, in junior high in China Grove.

“I didn’t play in the Little Leagues, the Gray-Y leagues, the Pop Warner leagues as a youngster, so they didn’t really know me when I got to China Grove, but the coaches there, guys like Steve Mabry and Raymond Daugherty, they saw something in me,” Crapster said. “I played fullback and linebacker. I broke my arm as an eighth-grader, but  I still loved everything about football.”

As a sophomore in the fall of 1980, Crapster arrived at South Rowan High at a fortuitous time. The Raiders, under head coach Reid Bradshaw, were at the apex of their football glory days.

“At South, there was not only a top-notch coaching staff, we had the advantage of the same system that we’d already been playing for years,” Crapster said.

Crapster earned a starting position on the varsity as a sophomore, but the second game the Raiders played rocked his confidence a bit.

“We go to A.L. Brown —  I’m sure it was our first road game — and that was probably the most talented high school team I ever played against,” Crapster said. “Ethan Horton, Terry Baxter, Lance Smith. You’re talking about going from playing for China Grove to playing against the athletes A.L. Brown  had in one year. Huge jump.”

Crapster was relieved to find out in the weeks that followed that every varsity squad wasn’t as fast or as big as A.L. Brown.

South won eight straight after that lopsided loss to the Wonders and took the South Piedmont Conference championship. South fell in the playoffs to a Lexington team led by Joe McIntosh. The next fall, McIntosh would be ACC Rookie of the Year for N.C. State.

“We had good defenses and really good teams every year I was at South,” Crapster said. “But the best team was our 1981 team, my junior year.”

In 1981, South went 10-2 (with a 10-game winning streak) and won another SPC championship. A.L. Brown had returned to 3A and the SPC and had a strong team, but the Raiders handled the Wonders, 20-8, in front of a huge crowd.

“I could put on a game face and block out the crowd, even it was 10,000 people,” Crapster said. “I was fortunate. I was born with that. I didn’t get nervous.”

South’s defense allowed 5.42 points per game in 1981, and it was even less than that during the regular season. Jeff Barringer, a defensive end who went on to Duke, was Rowan County Defensive Player of the Year. Back Michael Ramseur, who was headed to Wake Forest, was the county’s top rusher and Rowan County Offensive Player of the Year. Eleven Raiders, including Crapster, were on the 27-man all-county team. Crapster’s fellow all-county linebacker, Donny Spainhour was also the all-county kicker.

Crapster would follow Spainhour as the kicker when he was a senior.

“I couldn’t kick from the side, soccer-style, but there was a special kicking shoe we could use to kick straight-on,” Crapster said.

South wasn’t quite as strong in 1982 and lost a Week 9 showdown with A.L. Brown that would determine the SPC title. Crapster did all that he could have. He made 18 tackles against the Wonders.

Crapster made 14 tackles in South’s final regular-season game against Wadesboro’s Bowman High. South could have tied for first place if Concord upset A.L. Brown, but the Wonders beat the Spiders, 14-10.

South played in the Division II playoffs that were in place then for conference runner-up squads and lost to Lexington, 22-13. That would be the final South game for Bradshaw as well as Crapster.

Crapster made the all-county team for the second time in 1982 and weighed his college options. It looked for a while as if he would be headed to Furman, but instead his destination turned out to be Catawba, where Pete Stout, a legend as a high school coach in Salisbury and Burlington (43 straight victories at Williams High) had been named as the new head coach.

“I knew that with Coach Stout and a new staff everyone would be starting out equal and everyone would be earning their way,” Crapster said. “Looking back, it was one of the best decisions I ever made. I got the opportunity to play that I may not have gotten at a larger school. And I loved going to school at Catawba. Not just the football, I liked the professors. I liked the guys who coached the other sports. Catawba was the perfect match for me. I wouldn’t trade any of it.”

The 1980s were an era when college teams still ran more than they passed.  Catawba employed a five-man defensive front, with a middle guard, and just two linebackers.

Crapster didn’t know if he’d get any playing time as a freshman, but injuries happen in football. Late in the 1983 season, linebacker Greg West, who had played at Salisbury High, went down with a knee injury.

Crapster was the guy who stepped into the lineup for him. It was the last weekend of October, the homecoming game at Shuford Stadium. Catawba hadn’t won a game all season and Georgia Southern, which had just received a $2 million gift to build a new stadium was getting ready to move up in the world. Georgia Southern had a freshman quarterback, Tracy Ham, who would become a college football legend, but on that afternoon Catawba’s defense, inspired by Crapster, gave a mighty effort. Catawba lost 10-3.

Crapster tackled Ham on a lot of his 15 carries that day.

In 1985 and 1986, Ham would lead Georgia Southern to Division I-AA national championships. He became the first college player to run for 3,000 yards while throwing for 5,000 yards. Ham was drafted by the NFL,  but as a Black athlete. he knew it was unlikely he’d get a chance to play quarterback. He opted for Canada and was MVP of the CFL in 1989.

Catawba tied Guilford, 15-all, the next week, but the Indians went 0-9-1 that season.

In 1984, his sophomore season, Crapster was a regular from the opening kickoff and the Indians started a comeback toward respectability with three victories.

That’s the year Crapster broke the school tackle record with 130 and made the NAIA All-District 26 squad. He had an interception against Mars Hill and turned in a phenomenal game against favored Presbyterian in a 10-3 loss.

“Sophomore year was when I played just about every snap on defense and never got hurt,” Crapster said. “I was lucky. That gave me a chance to make a lot of tackles.”

He wasn’t as fortunate as a junior. A hamstring injury caused him to miss two games completely and limited him in others. He still made 85 tackles.

As a senior, the injuries piled up. Shoulder issues mostly, and there’s nothing worse than a bum shoulder for a guy whose forte was tackling people.

“The most challenging games for me were always against Carson-Newman,” Crapster said. “You knew they were coming at you with that split-back veer offense. They were a machine. To me, they were like a college version of A.L. Brown in their  heyday. You knew they were going to be good every year.”

The good news was that by his senior year, Catawba had moved up to a 5-6 record and was was no longer going O-fer in the South Atlantic Conference. From 1982-84, Catawba had been 0-21 in SAC games.

One of the prouder moments of Crapster’s senior year was appearing on the cover of the program for the Davidson game. Catawba won that one 51-28.

Crapster’s mother worked for Duke Power. That gave him the opportunity to start working and learning in the company’s marketing program while he was still a college student. That proved to be another opportunity that he successfully seized.

“I graduated from Catawba on a Sunday and went to work for Duke Power that Monday,” Crapster said. “And I’ve enjoyed working for Duke just as much as I did football.”

Crapster was assigned the No. 41 jersey at South Rowan. He grew to love it, but it wasn’t available when he got to Catawba. He did request to stay in the 40s, so he was happy when they handed him No. 49.

He takes some extra delight in that number now, as his two sons became college students at UNC Charlotte — the 49ers.

Crapster still follows all sports. Not surprisingly, he’s most interested in football. It’s also not surprising that his favorite to player to watch was recently retired Carolina Panthers linebacker Luke Kuechly.

“He had a nose for the football and was always around the football,” Crapster said. “That’s how I tried to play.”

Crapster has given quite a bit back to Catawba. He served on Catawba’s board of directors for years. He stepped down recently, but he’s still a member of the Catawba Chiefs Club.

It’s been 34 years since his final season at Catawba, but Crapster’s name still comes up whenever the South Rowan glory days are discussed.

“I think I loved football so much because it’s the ultimate team sport,” Crapster said. “I enjoyed every minute of it, from my first game right up to my last.”