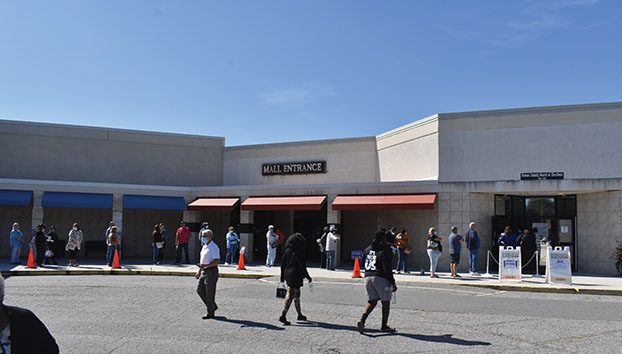 Dozens of voters lined up outside the polling place before it opened at 1 p.m., allowing Rowan County residents to vote on Sunday for the first time. Ben Stansell/Salisbury Post

‘Souls to the polls’: More than 1,300 cast ballots on first Sunday of early voting

SALISBURY — By the time polls opened at 1 p.m. at the West End Plaza voting site, dozens of voters had formed a line that stretched from the entrance of the polling site to the end of the shopping center several hundred feet away.

Enthusiasm for early voting was apparent on what was the first Sunday of early voting in Rowan County. In total, 1,316 voters cast a ballot on Sunday. West End Plaza was the most popular of the five early voting locations, with 404 people casting a ballot at the site by the time polls closed at 5 p.m., according to data published by the Rowan County Board of Elections. Almost 400 people voted at the South Rowan Public Library on Sunday, making it the second most popular site.

Along with voters who turned out early, several cars were lined up before 1 p.m. for curbside voting, which is being offered to individuals with a disability.

Several church vans were parked at the voting site, carrying members who were casting their ballots after attending a Sunday morning service. Rev. William D. Turner, the now-retired pastor at The Tower of Power United Church, brought about a dozen members of his former congregation to the polling site in one of the church’s buses.

Although Turner, who refers to himself as a “Reagan Democrat,” voted an absentee by mail ballot in September, he said that he was thrilled to help others vote in person by providing transportation to the polls.

“These are people who don’t have their own cars or transportation. We just left church and came down here,” Turner said. “It was most important to do this. It gives me peace knowing that all my labor has not been in vain. We’ve been waiting for this day.”

Sarah Fleming was one of the church members who rode to West End Plaza on Turner’s church bus. Voting for just the second time, Fleming said that it was “exciting” to cast her ballot on a Sunday.

Terry Jones, another voter who rode on the bus provided by The Tower of Power United Holy Church, said that there were more people voting than he’s ever seen before.

“I didn’t expect the line to be like it was,” Jones said. “But glory be to God because we got out of there a lot quicker than I thought we would.”

Jones said that he waited “no longer than 45 minutes” to cast his ballot. 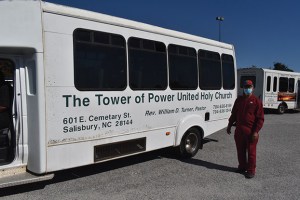 Rev. William Turner stands beside the church bus he brought to the West End Plaza voting site on Sunday. The bus carried about 12 members of the congregation to the polls. Ben Stansell/Salisbury Post

Edgar Cabanillas waited longer than Jones did to vote, but that’s only because he arrived at West End Plaza an hour early. Cabanillas said that he decided to vote on Sunday because it was convenient for him, the weather was beautiful and it allowed him to avoid the clusters of voters on Election Day.

“I just wanted to get here and get it done,” Cabanillas said.

Cabanillas, a Republican, cast his vote for Trump, which he did in 2016 as well.

“I want to keep the presidency where it’s at now,” Cabanillas said. “I feel that he should have another four years to prove himself worthy and to prove people wrong. There’s changes coming and it needs to happen.”

George W. Benson stood outside of West End Plaza watching the first Sunday voters stream into the polling site. Benson, a member of the Rowan County Board of Elections, said that the day was special for him because it marked the fruition of work conducted by himself and other board members to get voting on Sunday approved for this year.

While Benson said there has been a push for Sunday voting by certain groups in Rowan County for “many years,” it didn’t become a reality until this year.

“This whole effort this year started back in March with people showing up to a board of elections meeting to talk about Sunday voting,” Benson said.

As the election approached, three plans were proposed by county election board members on how to handle weekend voting. The state of North Carolina mandated that voting sites must be opened for at least 10 hours on the weekend. Benson proposed what he calls “the People’s Plan,” that called for the polls to open for seven hours on Saturday and four hours on Sunday. After the Rowan County Elections Board couldn’t pass any of the three plans unanimously by themselves, the plans were presented to the North Carolina State Board of Elections, which determined that Benson’s plan should be implemented.

Emily Perry, one of the founders of Rowan Concerned Citizens, worked to get the word out about Sunday voting by calling churches and community members. Perry was handing out masks, gloves and fans bearing a picture of late civil rights icon Rep. John Lewis to voters outside of the West End Plaza site. She was there as a proponent of “Souls to the Polls,” an initiative that seeks to promote voting among church congregations. Perry said that having polls open on Sunday will improve accessibility to voting for Rowan residents, especially those who may not be able to vote during the week.

“A lot of our residents don’t work in the city or county and they’re transporting to Greensboro and Charlotte,” Perry said. “They used to complain that the hours weren’t convenient for them by the time they got home from work.”

Brenda McCubbins, elections director for Rowan County, said that she and her staff have had to make small adjustments to accommodate Sunday voting.

“It has required us to get extra workers,” McCubbins said. “They are having quite a bit of overtime. We’ve tried to have the full-time weekday workers have a little break and then bring in some extra people. We did have to get more staff.”

McCubbins said that the Board of Elections had to adjust staff schedules several times, but the staff have been able to maintain a full complement of election workers at all times.

The larger challenge, McCubbins said, has been ordering and distributing personal protective equipment to voters at each of the five early voting sites in Rowan County as well as ensuring that voting sites are established to promote social distancing.

The vast majority of voters at West End Plaza on Sunday were wearing masks. Fleming, Jones and Cabanillas all said that they felt safe during the voting process. 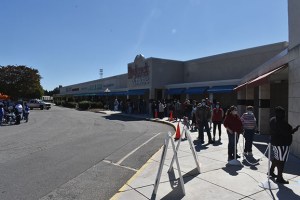 The line to vote stretched from the entrance of the polling place down to the former site of Big Lots at one point. Ben Stansell/Salisbury Post

Sunday voting will be offered again next week. Turner said that he plans on bringing another busload of church goers to polls after service if there are enough interested in voting.

After four days of early voting, 10,279 ballots have been cast, according to the Rowan County Board of Elections.

The county currently has the following sites established as early voting locations: