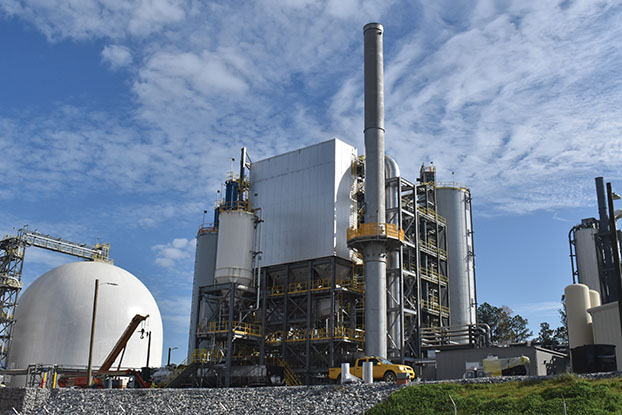 Called a STAR unit, the Buck Steam Station facility will recycle about 400,000 pounds of coal ash per year. At that rate, it will take the station about 15 years to recycle the 6.6 million tons of coal ash currently at the site. Ben Stansell/Salisbury Post

SALISBURY — When a tanker truck left the Buck Steam Station in September carrying a load of recycled coal ash, it marked a milestone for Duke Energy.

Four years earlier, Duke was ordered to excavate coal ash — a hazardous byproduct of burning coal for power — from ponds throughout North Carolina. While most of that coal ash will be moved to lined landfills, a portion of it will be recycled at facilities like the newly-built Buck Steam Station in northeastern Rowan County.

While the state mandated removal at some sites, a resolution at Buck Steam Station resulted from a court settlement involving the Yadkin Riverkeeper and the Waterkeeper Alliance over concerns about water contamination in the Dukeville area as a result of accumulated coal ash.

The Buck Steam Station plant was built specifically to recycle ash created by the coal-fired power plant of the same name. Now demolished, the coal facility was named after Duke Energy’s co-founder, James Buchanan “Buck” Duke. The original Buck station was a six-unit plant that burned coal from 1926 until it was formally retired in 2013. But when it was retired, it left behind about 6.6 million tons of ash in a nearby pond that has since been drained. A new facility required as part of the riverkeeper settlement will recycle 400,000 tons of that coal ash a year using technology the company says is cutting-edge.

Once the coal ash is recycled, it will be sold to concrete producers who have increasingly used coal ash to strengthen their concrete products. Norton cited the Arthur Ravenel Jr. Bridge in Charleston and the World Trade Center as examples of structures constructed using ash-infused concrete. The coal ash recycled at Buck Steam Station will serve markets in North Carolina, South Carolina Tennessee and Virginia.

Norton said he views the Buck Steam Station as a win for both environmentalists and the company’s consumers.

“Any proceeds from these ash sales are used to offset customer rates,” Norton said. “The recycling facility will permanently take (coal ash) out of the environment and it benefits customers, so it’s a definite win-win.”

Before the coal ash can be sold to concrete producers, it must undergo an intensive, yet simple recycling process at Buck Steam Station.

Labeled a STAR unit, the facility first dries the coal ash and then uses extremely high temperatures to extract carbon to make it suitable for use as a concrete strengthener. Norton said that most coal ash has a carbon content anywhere between 6-15%. It must be reduced to 1% to be usable. The excess heat produced during the carbon-removal process is recycled and used to dry the next batch of excavated ash. The recycled ash, having been transformed into an almost sand-like substance, is then held in a silo before being transported using airtight pneumatic tankers to concrete producers. 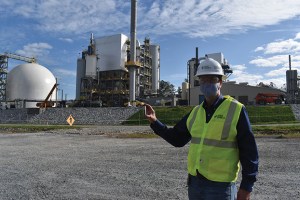 Duke Energy Spokesperson Bill Norton holds up a vial containing both non-recycled coal ash and recycled coal ash. The recycled ash, which is sand-like in consistency and color, sits at the top of the vial. Ben Stansell/Salisbury Post

Although the process of recycling all of the ash at the site could take up to 15 years, Yadkin Riverkeeper Executive Director Edgar Miller said that it is promising to see action being taken.

“At the end of the day, we’re pleased with the progress there and we think the permits and planning represent significant milestones in hopefully permanently removing the threat of coal ash from the basin,” Miller said.

Miller added that the Riverkeeper is supportive of recycling coal ash for reuse.

Miller said that the Yadkin Riverkeeper will continue to monitor areas around the coal ash basin to ensure that no coal ash leaches into the Yadkin River. Miller also said that he would like to see the air and water quality around the site monitored to ensure that Duke is following standards required by the permits it received from the state to operate the facility. Miller said he has no reason to believe they are being violated currently and that Duke appears to be acting as a “good corporate citizen.”

Norton said that the facility, and the natural gas power plant nearby, combine to produce 60% lower nitrogen oxides and 95% lower sulfur dioxide emissions than the coal plant did.

Once all 6.6 million tons of coal ash are recycled, Norton said there is currently no plan for the new recycling unit.

Duke built a new road to service Buck Steam Station. The road, called Buck Station Road, is meant to divert truck traffic away from the nearby Dukeville neighborhood directly to the facility.

About 300 workers were employed to build the coal ash recycling facility and it now employees 15 full-time workers and 30 truck drivers.

Buck Steam Station, which houses one of three coal ash recycling facilities run by Duke Energy in North Carolina, is one piece in the puzzle for Duke Energy’s quest to reach net-zero carbon emissions by 2050, the company says.

“We’re trying to push the envelope in everything we do,” Norton said.

SALISBURY — At a little over halfway through its 2020 fundraising campaign, the Rowan County United Way is right where... read more