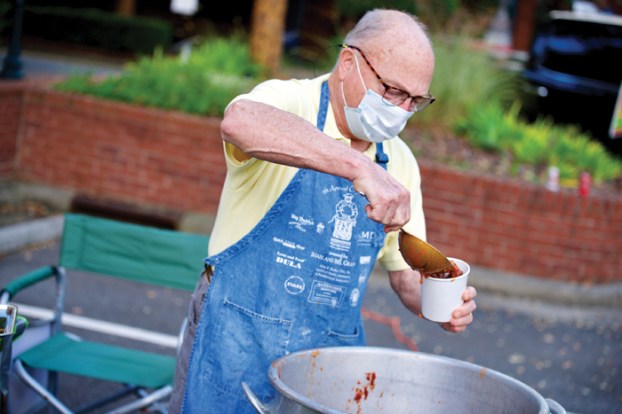 Carl Blankenship/Salisbury Post - Donny Clement packaging up his award-winning traditional chili. Clement said it takes about 14 hours to prepare the 28 gallons of chili he made for the event.

SALISBURY — Waterworks Visual Arts Center had to make some changes to its annual chili festival this year, but it made sure to hit the highlights.

This time around, the 15-entry contest was pared down to just three and the museum pre-sold tickets to so patrons could pick up boxed meals with the chili of their choice in a drive-thru format. Waterworks Executive Director Anne Scott Clement said each of the three chilis were past winners, and the competitive element was scrapped this year.

Donny Clement, Anne Scott’s husband and the chef behind the traditional chili, said he is glad the museum could hold the event at all this year.

Donny has been entering chili in the contest since it started 12 years ago and won three times. He said it takes about 14 hours to cook his 28-gallon pot of chili. 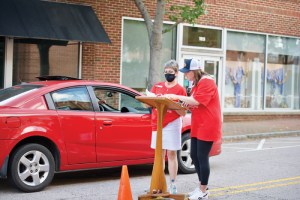 Carl Blankenship/Salisbury Post – Marketing Coordinator Holly Zemke and board member Taylor Durham signing people in at the drive-thru. People who ordered ahead could have their meals ready when they arrived.

Megan Ferden and Taylor Durham, board members and co-owners of the Lettered Lily, cooked the white chicken chili, which won two years in a row and has been dubbed “the Lily Chili.”

Ferden said the pair has refined the recipe over time and now make the giant pot of chili like a well-oiled machine.

“We wanted to stand out,” Ferden said. “We wanted it to be different, memorable and delicious.”

Typically the event would be hosted in F&M Bank’s Trolley Barn, which adjoins the Waterworks’ facility, and the venue would be packed people sampling all the chilis. This year, the event moved into the parking lot outside, which wraps around the building from Liberty to Lee streets.

Anne Scott said the organization came up with the idea in July because it wanted to keep engaging with its patrons. The organization pre-sold about 250 tickets and was hoping to sell at least 50 more meals the day of.

The cook off normally rakes in $12,000-$15,000 for the museum. It expected to take in a normal amount this year, but the annual oyster roast is its largest fundraiser of the year and usually takes in about $30,000. Anne Scott said the museum is not sure how it will handle the roast yet.

“It’s about coming together to support our mission of education and outreach programming,” Anne Scott said.

Anne Scott said art museums can be intimidating for people who do not know much about art, but Waterworks tries to be welcoming and educational for anyone who is curious. Right now, the museum is hosting exhibitions by three North Carolina artists.

“We are a teaching museum,” Anne Scott said.

Waterworks board president Ed Hull said he became interested in the museum after he moved to Salisbury from New York. He was asked to join the board a few years ago. Hull said joining the board is one of the best decisions he has made, noting his appreciation that the museum is one of the few chartered institutions in the state.

Hull said he is excited the museum had the chance to hold the event. The day of, Hull was serving up chili for people who bought meals day of.

SALISBURY — Lunda Eller has one request for people when they drive over the overpass formerly known as bridge No.... read more