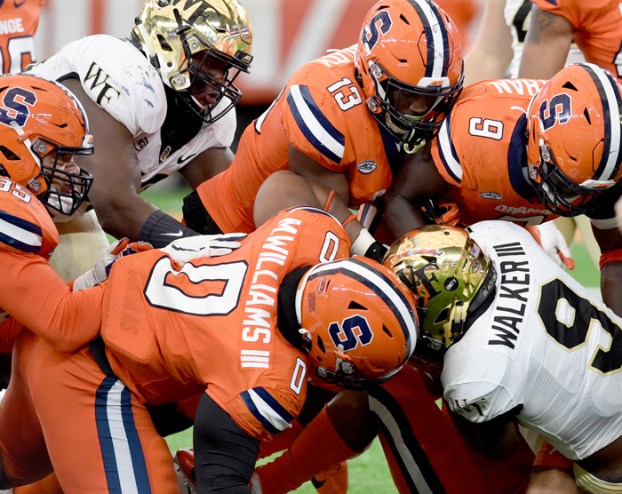 Syracuse defenders swarm Wake Forest running back Kenneth Walker III (9) during a game on Saturday, Oct. 31, 2020, at the Carrier Dome in Syracuse, N.Y. (Photo courtesy of the ACC/Dennis Nett | dnett@syracuse.com)

SYRACUSE, N.Y. (AP) — After a perfect October and Wake Forest’s fourth straight win, coach Dave Clawson has a pretty good handle on his team. He likes what he sees.

“I think we’re a much better team. It’s a team that’s capable of playing in different ways to win,” Clawson said. “It’s nice to know we don’t have to score 40 points to win like we did the last two years. You can’t cheat against us. We have good balance going on.”

Sam Hartman completed 19 of 33 for 250 yards and one touchdown, an 81-yard pass play to Jaquarii Roberson, who caught seven passes for 130 yards. The play, on a third-and-6 early in the third quarter, squashed most thoughts of a Syracuse comeback. The Orange trailed just 17-7 at the time.

“That was a big play,” Clawson said. “We came out of the first half a little disappointed. We go from being three-and-out and handing the ball to them, where if they score it’s a one-score game, to making a really big play.”

Hartman scrambled for some time, threw off his front foot, and found Roberson wide open.

“It wasn’t the prettiest pass. I looked up and I said, ‘Holy cow, he’s wide open,’” Hartman said. “Hats off to him for getting open.”

The pick six was the third of the season for the Demon Deacons, tied for the nation’s best, and the team’s 11th interception of the year, which leads college football. Wake has forced 13 turnovers during its winning streak.

Rex Culpepper was 15 of 27 for just 85 yards and one touchdown with two interceptions for Syracuse, a 21-yard connection with Nykeim Johnson, who set up the Syracuse score with a 26-yard punt return. Cooper Lutz, making the first start of his career, had 83 yards.

The injury-depleted Orange played without two key starters, running back Sean Tucker and safety Trill Williams. Tucker, a true freshman who gained 100 yards in two of the three games he started, suffered a leg injury a week ago against Clemson. Williams is also dealing with a lower-body injury. Among starters out for the season are starting quarterback Tommy DeVito and preseason All-American defensive back Andre Cisco.

“We’re shorthanded. You’re seeing guys make mistakes,” Syracuse coach Dino Babers said. “An older guy making a mistake, that really gets on me. The younger guys are out there battling and you expect them to grow. There needs to be growth. For some of those guys out there, this is their third, fourth, fifth game and they need to be getting better, not staying the same.”

Improvement probably won’t come anytime soon as the Orange continue to incur too many penalties. They had eight for 81 yards in this one.

“It’s disappointing because without those penalties I really believe that that one (Walker’s second score) doesn’t get into the end zone.” Babers said. “You don’t have to give good offenses, you don’t have to spot ‘em first downs or penalties like that to get them moving. You’re not going to beat good football teams if you give them stuff like that.”

In his last three starts, Rex Culpepper is 44 of 93 for 471 yards, five touchdowns and six interceptions.

Syracuse continued to have problems on third-down conversions. The Orange were successful on just three of 11 chances.

Now the Demon Deacons have a full head of steam heading into a bye week.  After that, they face No. 15 North Carolina on the road.

The Orange  play host to Boston College next Saturday.