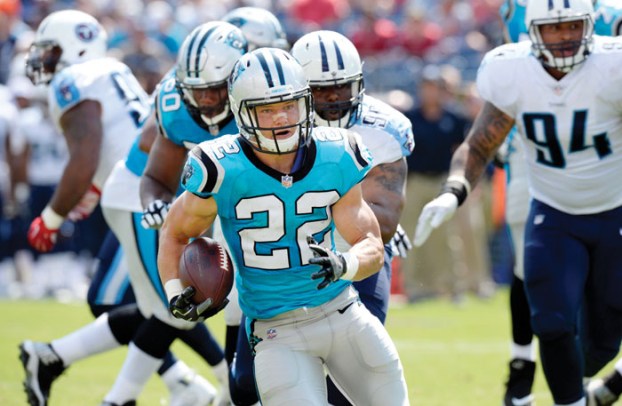 AP File Photo/Mark Zaleski Carolina Panthers running back Christian McCaffrey (22) may be out for multiple weeks with a hamstring injury.

CHARLOTTE — Panthers coach Matt Rhule is “very hopeful” Christian McCaffrey will play Sunday against the Kansas City Chiefs after the running back went through his first padded practice on Wednesday since Week 2.

McCaffrey has missed Carolina’s last six games with a high ankle sprain. He’s still listed as designated to return from injured reserve and Rhule was pleased with how McCaffrey practiced.

“He looked like Christian. He looked good. He looked sharp,” Rhule said. “We will see how his body responds (on Thursday). … He did a little last week (at practice), but this was his first padded day.”

The Panthers (3-5) certainly could use McCaffrey as they look to snap a three-game losing streak when they face the defending Super Bowl champions. If McCaffrey returns it’s unclear if his role would be reduced following the emergence of Mike Davis, who led the way in three straight wins.

Davis has been held to 168 yards from scrimmage during Carolina’s current three-game losing streak. Rhule likes what Davis brings and said he’ll still have a role in the offense when McCaffrey returns, although he wouldn’t define exactly what that entails.

But it’s pretty clear the first-year head coach is chomping at the bit to get his 2019 All-Pro running back on the field. Last week he said McCaffrey couldn’t be back soon enough,

“Christian brings elite production,” Rhule said. “On days when you’re not great on third down, he’s a tremendous third-down matchup. Explosive runs. He can catch the ball out of the backfield. He’s one of the best in the National Football League. Like any great player, you feel better about your chances when he’s there than what he’s not.”

Chiefs coach Andy Reid said McCaffrey is “arguably the MVP of the league” when he’s healthy, and said his defense will be focused on stopping him.

McCaffrey has been missed in the red zone. The team was 4 of 5 on scoring touchdowns inside the opponent’s 20-yard line when McCaffrey was in the lineup, with the running back scoring four TDs. However, with McCaffrey out of the lineup, the Panthers are converting less than 50% (10 of 21) of their red-zone trips into touchdowns.

Rhule said he wouldn’t rule out using McCaffrey and Davis on the field together moving forward, particularly given McCaffrey’s skills as a receiver.

“We all know Christian’s ability to line up and play receiver,” Rhule said. “So I think the door is open to be creative with all those guys.”

Of course, McCaffrey’s return may not matter at all if the Panthers can’t protect quarterback Teddy Bridgewater, something that has emerged as a problem for the offensive line over the last two weeks.

“When Teddy Bridgewater is upright, he’s playing like one of the best quarterbacks in the National Football League,” Rhule said. “When we protect the quarterback, we’ve been really good. When the quarterback’s been under duress, we haven’t been the offense that we want to be in.”

NOTES: Panthers safety Jeremy Chinn, looking like an NFL Defensive Rookie of the Year candidate, did not practice Wednesday due to a knee injury. DE Brian Burns said of Chinn: “I told him to rest up. It’s probably more serious than what he thinks.” … Panthers cornerback Rasul Douglas returned to practice after missing two games on the COVID-19/reserve list. …. Left tackle Russell Okung was back at practice after missing two starts with a calf injury.