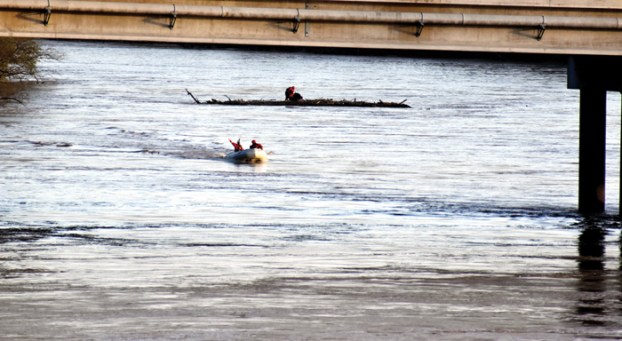 Two Zodiac rescue boats operated by members of the Salisbury Fire Department and Millers Ferry Fire Department were dispatched to save the stranded kayakers. One kayaker was clutching to debris floating in the water. Ben Stansell/Salisbury Post

SPENCER — First responders rescued three people from the surging waters of the Yadkin River on Saturday afternoon after their kayaks overturned and left them struggling against exceptionally high water near the I-85 bridge.

The three kayakers were pulled from the river around 4:30 p.m. by water crews dispatched by Millers Ferry and Salisbury Fire Departments. From there, the three people were taken in an ambulance to the Novant Health Rowan Medical Center with what appeared to be minor injuries.

Millers Ferry Fire Department Chief Josh Fox said crews responded to a water rescue call around 3:40 p.m. There were reports that several kayaks without passengers had washed up near the I-85 bridge and Norfolk Southern railroad trestle. Other Rowan County agencies and Davidson County units were also deployed to the scene.

“We made the decision to put in downstream so that we could make our way up to intercept them,” Fox said.

The Yadkin River’s waters were still high due to the influx of rain brought on by the remains of Tropical Storm Eta last week. The extra water created additional challenges reaching the stranded kayakers.

“The water was moving extremely fast. The water levels were still up,” Fox said. “Although the rain has stopped, we’re receiving all that runoff from the mountains and you can tell there’s an increase. We’re also getting the debris. That poses more dangers to our personnel because they have to weave in and out to make sure they don’t hit anything that could cause damage to the boat and stop them from getting to the victims.”

As the boats approached the bridge, they quickly identified three people who needed to be rescued. One kayaker was hanging onto a tree above the water, another was clinging to a tree in the water and a third was huddled against a pile of debris that was floating down the river. There were five kayakers in total, but the other two were able to escape the river on their own and watched as their companions were saved from the water.

Salisbury Fire Department personnel rescued one of the victims while Millers Ferry firefighters saved the other two. It took the rescue crews about 25 minutes from the time the boats were deployed to bring the kayakers to shore.

“Overall, I thought it went well,” Fox said. “I’m very happy with the outcome. Everybody gets to go home tonight to their families.”

Town of Spencer creates citizen review board for police

By Carl Blankenship carl.blankenship@salisburypost.com SPENCER — Spencer’s Board of Aldermen on Tuesday voted to establish a citizen review board for... read more