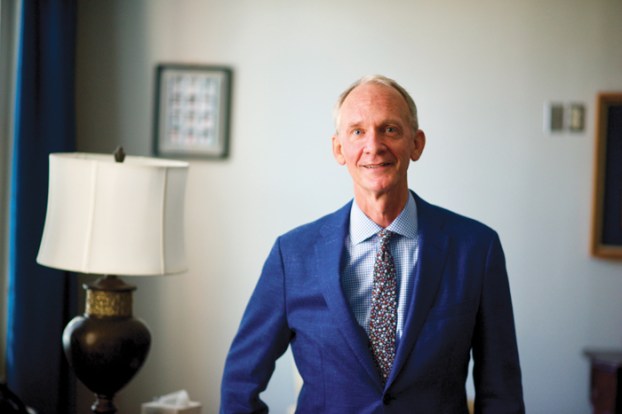 There is probably a large list of things that keep college presidents awake at night, but there’s one in particular for Catawba College President David Nelson.

It isn’t COVID-19, though you could certainly excuse him for pacing around after midnight and thinking about a one-in-a-lifetime global pandemic.

No, Nelson, a first-generation college graduate himself, says he worries about those who could benefit from a college education and, more specifically, a Catawba College education.

Nelson didn’t go to college because his family pushed him to do so. Instead, he benefited from the attention of a music and English teacher who urged him to do so.

One of those teachers, made Nelson sit in his office and fill out college applications.

“He wasn’t sure that I would follow through because I had no encouragement otherwise,” he said.

Nelson, of course, went to college, earning bachelor’s and master’s degrees in music from Hardin-Simmons University and a doctorate in theology from Southeastern Baptist Theological Seminary.

Now, he makes service to others and to the community a core part of his mission as a college president and a personal principle.

“My purpose in life, and I come to Catawba very much out of vocation and out of a sense of calling, is to pay that forward,” Nelson told the Kiwanis Club of Salisbury on Friday. “So, what keeps me up at night is imagining the student who would benefit from a Catawba education, whose life would be transformed by  Catawba College and who doesn’t even know about us or who knows about us but doesn’t have the resources.

“I keep wondering where are the people like us who don’t get to go to college and how is it that we offer and how can we raise the resources to ensure those students can come.”

Nelson is still relatively new on the job. His first official day on the job was July 1, meaning that he was dropped straight into planning for an unprecedented school year.

“No one taught us how to do college during a pandemic,” Nelson said. “Or, I missed the class on that at least. So, we’ve all been learning.”

After balancing health and safety with the benefit to the students, Catawba judged that in-person learning was best. Nelson says the “supermajority” of classes are being taught in person, though some are hybrid classes, with some in-person days and others online. A third of Catawba’s classes are only online.

The college uses a four-stage assessment of how its COVID-19 efforts are going — green, yellow, orange and red. Green is self-explanatory. Yellow involves a spike in cases and requires immediate action. Orange involves going to remote learning for a couple weeks. Red requires sending all students back home.

The good news? Catawba has remained green the whole time.

As of Friday, there were two students in on-campus quarantine and four employees in isolation or quarantine.

Some more good news? There’s life beyond the pandemic, Nelson said, adding that he thinks about the college’s future in three basic categories: identity, sustainability and visibility.

That includes getting students to think about a career as being something filled with purpose.

“We want meaningful lives filled with purpose, but we don’t have to invent that at Catawba. It is written into the DNA of the college to think in those terms,” he said. “So, I come in not saying we need to change any of that. I come in saying we need to affirm that … I want us to really hold onto those things that really make Catawba, Catawba — the things that if you take them away it wouldn’t be the same college any more.”

But Nelson has some ideas about the future and the college has plans for additions and enhancements.

Some recent additions include graduate-level programs in business administration, sports management and clinical counseling and mental health. Nelson said the school met its planned cohort numbers for the first year and are enrolling folks for a second cohort now. The programs don’t require students to attend classes on campus because “people are out in their profession and they’re wanting to get a graduate degree and we want to accommodate them.”

He said there will be concentrations added within the master’s degree programs as well as some certificate programs. There are also planned additions focusing on data science and computer science.

Another project will involve people who attended Catawba and earned a significant number of credits but did not complete a degree. The college will contact “a few hundred who may be 30 hours from completing a degree” to let them know about a general studies program that the faculty approved last spring.

Whatever the future brings, Nelson promised that people would hear him talk frequently about being a student-ready campus — that is, helping students succeed once they get on campus.

“I live off of theater and I need theater, so to do this show has been great. I’m so excited.”... read more