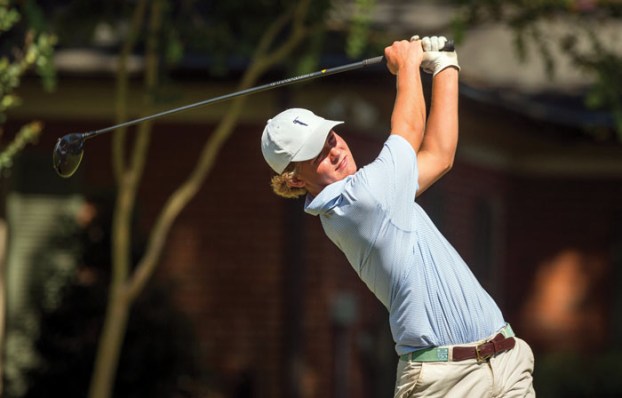 Salisbury Post file photo Charlie Barr competes during the first round matches in the Championship Flight of the Labor Day Golf Tournament at Salisbury Country Club on Sept. 5. Barr has signed to play golf at High Point University.

SALISBURY — A young man known for long drives will be making a relatively short drive to college.

Long-hitting Charlie Barr, a Salisbury native who is a senior at Cannon School in Concord, has signed with High Point University’s golf program.

The Panthers, who feature purple as their dominant color, are located about 40 miles from Salisbury.

“It’s far enough away that I’ll be on my own, but it’s not so far away that I can’t get home if I need to,” Barr said. “I’ve got a sister at Wake Forest, so she’ll be close. My parents are already making plans to see all my matches.”

Barr attracted recruiting interest from a list of schools that included Wake Forest, N.C. State, Virginia, Wofford and UNC Wilmington, but High Point had the inside track for several years.

“There were schools that probably would have offered, but I let them know early that I’d decided on High Point,” Barr said.

High Point hired former Charleston Southern assistant Brady Gregor as its head coach in 2016. Not long after that, Gregor established a solid connection with Barr.

“I’d just made the decision to focus on golf instead of basketball in high school and I was playing in tournament when Coach Gregor came up and talked to me,” Barr said. “He was the first coach to really recruit me, and he never stopped. He’s someone I’ve always felt at ease with, and we’ve got a love for fishing in common as well as a passion for golf. My parents are very comfortable with him being my college coach.”

“I know it’s not the biggest school or the biggest golf school, but it’s a great school,” Barr said. “High Point has never wanted to be a backup plan for college students. They’ve been doing things for a long time to make High Point the first choice.”

Barr, who was swinging a golf club at age 4, has been a name to know in local golf since he was 13 and teamed with Troy Beaver to win the Country Club of Salisbury’s prestigious Crowder-Dorsett Memorial Labor Day 4-Ball Golf Tournament.

While both of his parents were college athletes, it was a grandmother, Boots Carter, was instrumental in getting him on golf courses early and often.

Barr credits Warrior pro Brian Lee, his swing coach, as the person who’s been the biggest difference-maker in his career.

Barr competed in cross country, soccer, tennis and basketball, in addition to shining in golf at Salisbury Academy. He was the school’s male athlete of the year for 2016-17.

As a freshman at Cannon School in 2018, Barr made the All-State team and helped Cannon romp to a 22-stroke victory in the North Carolina Independent Schools Athletic Association state tournament in Pinehurst. Barr shot 75-73 — 148 and placed sixth individually.

As a Cannon sophomore in 2019, Barr compiled the best stroke average in NCISAA. He repeated on the All-State squad. Cannon School successfully defended its NCISAA state title by 21 shots. Barr finished second individually, shooting 70-76 — 146 at Grandover Resort in Greensboro.

Barr’s entire junior season was a casualty of COVID-19. Cannon didn’t get to play a single match.

But Barr had an exciting summer, despite some tournament cancellations and a shoulder injury that cost him about three weeks.

In late June, he made quite a bit of noise by finishing as runner-up in the  North Carolina Junior Boys Championship in Winston-Salem. He was one putt away from winning. He struggled to a 75 in qualifying and had to make a lengthy putt just to qualify for match play. But then he heated up. Seeded 54th in a 64-man field, he won five matches and reached the final. The championship match went 20 holes.

In late July, he tied for 17th in the 54-hole Carolinas Junior Boys Tournament in Florence, S.C. His effort there included a second-round 67.

He tied for ninth in the Hope Valley Junior Invitational.

He believes he played his best golf of the summer in August at the Beth Daniel Junior Azalea Tournament held at the Charleston Country Club. He shot 66-68-70 — 204 and tied for third at 9-under. That 66 included a sizzling 6-under front nine.

“It was a pretty consistent summer,” said Barr, whose career-best round is a 62 on his home course, the Country Club of Salisbury. The Barrs live next to the second hole at the Country Club.

“The four years at High Point are going to be really important years, not just on the golf course, but in the classroom,” Barr said. “I’ll be preparing for the future.”

That future may include lots of golf.