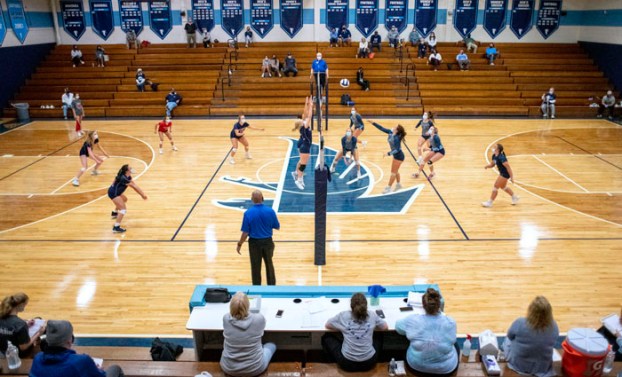 West Rowan and East Rowan battle at the net as a handful of spectators take in the acton. The West Rowan Falcons varsity volleyball team defeated the visiting East Rowan Mustangs in the first match of the season. Mt Ulla NC 11/17/20 JON C LAKEY/FOR THE SALISBURY POST.

MOUNT ULLA — West Rowan hitters had to knock East Rowan libero Riley Hill almost to the concession stand to get a kill down, but the Falcons did what they had to do and they swept the Mustangs in masked North Piedmont Conference volleyball on Tuesday. 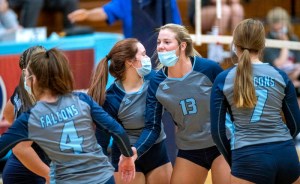 It’s a trimmer, higher-jumping Love that the Falcons have on the court this year. She’s a huge part of the equation for the Falcons who are trying to replace a pair of dominant net players — underrated Carly Stiller and all-world Tori Hester, now a freshman starter in D-I volleyball at Troy.

Another part of the replacement recipe is tall freshman Emma Clarke. She’s still learning the game, but the athletic ability is off the charts. She produced seven kills and three blocks.

“You could tell it was our first game because we weren’t always connected,” West head coach Jan Dowling said. “We’ve got a lot of stuff to try to figure out in the days ahead, but we did look athletic. And we did play well together. We played like sisters.”

The biggest thing about Tuesday’s activity, of course, was just playing the game, even in front of a sparse, socially distanced crowd of adults and jayvees. It was the first athletic event held at West since the COVID-19 pandemic shut things down last March.

“Even without the fans, it was a bit of normalcy that was much needed for all the kids on both teams,” Dowling said. “These are athletes, and athletes need to compete to be normal. This was normal.”

Dowling isn’t downplaying COVID-19. She and her daughter, Kaylin (KK) Dowling, West’s senior star, both had a bout with the virus, although they experienced far different symptoms. The coach had fever and headaches that knocked her off her feet for more than a week. KK had an inflamed throat and experienced aches all over her body.

Both Dowlings have fully recovered.

KK posted team highs of eight kills and five aces, and there was generally a flood of West points every time she stepped to the service line to launch left-handed rockets.

“I’ve been working on my serve a lot, on the toss, as well as on the jump, and I was aggressive with it tonight,” said KK, who is expected to announce a college decision soon.

Twelve players contributed on the stat sheet for West. Madelyn VonCanon and Anna Blackledge had three kills each. Setters Allison Ennis (13 assists) and Noe Gaeta (12 assists) were equally effective. Brooke Kennerly had a team-leading 11 digs. Ennis had eight digs, while Dowling had seven.

“We mixed it up really well,” Coach Dowling said.

Setter Zoe Larson sparked East early in the first set. She had a kill and service ace back-to-back and had East even at 5-all, but then Dowling got on a roll. Suddenly, it was 14-5 and East coach Sandy Lytton couldn’t stop the Falcons’ momentum with timeouts.

East’s 6-foot-1 sophomore Leah Hinceman had some impressive flurries of blocking and hitting in the second set. Again, the Mustangs kept it tight early. East appeared to be gaining  energy after a strong combo block by Anasty Faavesi and Mikayla Tucker, but then West pulled away with Dowling at the service line and scored the last eight points. Dowling ended the set with an ace.

East got down 9-3 right away in the third set. Trailing 20-11, East played some of its best points of the match to claw back to 20-16, but Dowling got the kill that stopped East’s comeback. Then the Falcons finished off the sweep.

It was a win, although it was a long way from business as usual for the Falcons, who have taken 67 of their last 80 matches.

Playing in masks? It’s not routine.

“The mask doesn’t bother my vision that much, but you get out of breath whenever there’s a long rally,” KK Dowling said. “The mask gets sweaty and wet.”

For Love, the mask presented a different problem.

“Communication,” she said. “It’s so much harder to hear your teammates, to understand what they’re saying.”

The Falcons are a work in progress, but they’re clearly going to be good again.

And right now, win or lose, just playing is a victory for everyone involved.

NOTES: Zoe Larson had 12 assists for the Mustangs. … Hannah Larson had seven kills and 13 digs. … West plays at South Iredell on Friday, while East makes the short trip to Carson. Carson lost 3-0 to North Iredell on Tuesday. … In Tuesday’s jayvee contest, West took a 25-15 and 25-18 victory. DeDe Cuthbertson had five aces and five kills for the Falcons. Maia Gaeta had four kills. For East. Jaeley Legg had five kills. Hallie Cox had 12 digs.

Wake Forest-Duke football game called off because of coronavirus, injuries

Associated Press The Atlantic Coast Conference says this weekend’s game between Duke and Wake Forest won’t be played due to... read more