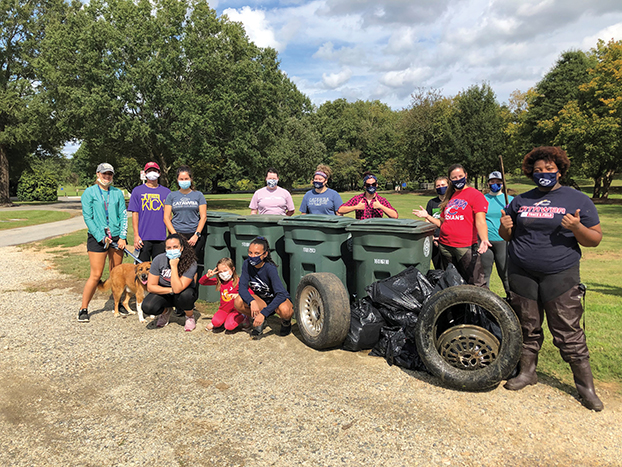 SALISBURY — Students at Catawba College don’t have a class pet, but they have adopted an Oscar.

Nicknamed for the furry green Sesame Street character with an affinity for garbage, Oscar is a 4-by-4-foot trash catching device composed of fencing, PVC pipe and black-plastic tubing.

Oscar was installed in a creek that feeds into Memorial Park pond over a year ago by the city of Salisbury’s Stormwater Services division. Oscar’s job is to prevent litter from filtering in from the 300-acre watershed above him into the pond and further down the waterway.

Oscar is a new solution to a problem that has long impacted waterways in Salisbury and Rowan County.

“We knew we had an issue with litter being one of the major pollutants we have right now and it was always in our lakes, streams and stream banks,” said Michael Hanna, the city’s Public Works Administrative Services Manager. “We tried to figure out a way to capture that before it got to the bigger watershed.”

The blueprint for Oscar came from the city of High Point, which showed off a similar device at a conference attended by Hanna and other city employees.

“We took their idea and tailored it to what we thought we would work and molded it to our stream,” Hanna said.

Hanna said that they used scrapped parts left over from other projects to build Oscar over the course of several months. Creating Oscar was a project that their entire staff embraced, Hanna said.

“We want to do everything we can to protect our environment and to be able to design something like this and put it in place,” Hanna said. “To see the fruit of it, to see it working and capturing all this trash coming down, it’s exciting to see.”

After installing Oscar, Hanna watched the trash pile up.

“It’s done a phenomenal job for us. All of the trash is pretty remarkable, the amount of trash it actually collects,” Hanna said. “As we cleaned it out, we were collecting about four 96-gallon trash rollout cans full of trash in the breeze.”

Oscar floats on top of the stream, allowing water to flow around and under him while using pink pool noodles wrapped in black plastic tubing to direct litter into a cage. By collecting trash, Oscar is not only stopping pollution, but is also preventing a pileup of debris that could cause flooding.

“The way this device is designed, as the water levels go up and down, the device floats and goes up and down and it still allows proper flow to go underneath it,” Hanna said. “It just catches that trash up on the surface level.”

Hanna said that city staff members shared the duty of collecting the garbage for several months, but now, students at Catawba college have taken on the commitment. 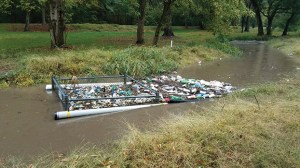 Even though Oscar is composed of spare pieces and scraps from other projects, the device is effective at preventing garbage from littering local waterways. Photo submitted.

Jay Bolin, Chair and Associate Professor of Biology at Catawba, saw Oscar for the first time when he was on a walk with his dog.

“The serendipitous thing is that I just walk my dog at Memorial Park and I saw a sign on the Oscar that said ‘Do you want to adopt this? Call this number,’ ” Bolin said. “I noticed it and I thought that, especially this fall, I wanted to create some opportunities for student engagement.”

Bolin and other faculty members have since hosted several clean-up days, where students have suited up in waterproof waders and have helped collect the garbage that Oscar gathers. At most of the clean-ups, students have pulled several trash cans full of debris from the stream.

Bolin said that they’ve tied the clean-up days into their curriculum.

“We do a lot of aquatic ecosystems management in our environmental science curriculum and this directly teaches them about the impacts of watersheds,” Bolin said.

Other Oscar devices could soon show up for adoption in nearby streams.

“My goal is to get another one adopted at the beginning of the new year,” Hanna said. “At Hurley Park, we want to get a smaller Oscar put in place in their stream. We would have to scale it down quite a bit but that’s the goal.”

‘Life of the school’: Livingstone College remembers student who died from COVID-19

SALISBURY — Jamesha Waddell had a smile you couldn’t miss. More often than not, she was smiling, even if she... read more