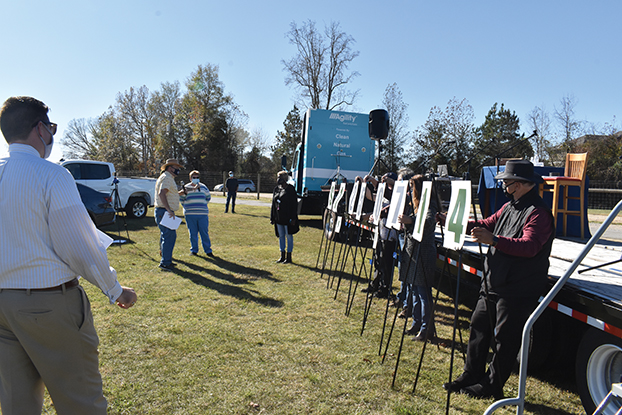 The current fundraising total was revealed during the United Way campaign finale on Friday, but the fundraising will continue. Ben Stansell/Salisbury Post

SALISBURY — Under the bright sun at the Rowan County Fairgrounds, the United Way celebrated its 2020 fundraising campaign on Friday afternoon with hijinks, a game show and a car giveaway.

Although the drive-thru finale was held at the same location and at the same time as the kickoff event two months ago, the two happened under drastically different weather. Instead of a drizzle coming down from gray skies, the weather on Friday was clear and comfortable.

In the contrast in weather, campaign chair Andrew Smith found a metaphor.

“We have this beautiful day,” Smith said. “I think it’s fitting for the campaign. It has only gotten better.”

The finale began in confusion, when United Way Executive Director Jenny Lee was nowhere to be found during introductions. After watching the uncertainty creep in among Smith and other volunteers, Lee emerged from an unmarked law enforcement vehicle and was escorted to the stage by a Salisbury police officer. In Lee’s hands was a check for a $50,000 donation to the campaign from the department.

Even though the campaign has been celebrated, the United Way will continue its fundraising efforts in the coming weeks to see just how close it can get to its goal.

“Just because it’s the finale, doesn’t mean it’s over yet,” Lee said.

To reveal its current total, Smith and Lee invited two attendees to play a game where they guessed which numbered cards filled in the correct amount of money raised.

“We felt like we needed to be interactive with it a little bit since we’re outside and we decided to steal a little bit from the Price is Right,” Smith said. “None of us are quite Bob Barker, but it was a fun way to spice things up a bit and announce our total.” 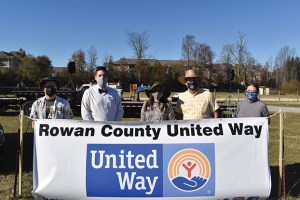 Once the big number was unveiled, it was time for the moment that 12 individuals were waiting for. At each report meeting over the course of the campaign, names of donors have been drawn to be finalists for the new car drawing. After the 12 finalists took the stage at the finale, their names were drawn out of a box by representatives from each of the four car dealership sponsors. One by one, when someone’s name was called they left the stage until it was down to only two people.

That’s when David Cromley’s name was called out as the winner of the car. Except, Cromley wasn’t either of the people on stage. He was watching from his home in Illinois.

A sales director for Innospec, Cromley has been donating to the Rowan United Way for several years without even living in the county.

“I have a lot of people who wonder why I give to the United Way in a county that I don’t live in,” Cromley said. “It’s necessary to me to support it no matter where it is and that’s where our organization is and I’m happy to do it.”

Innospec’s campaign chair, Susan Barnhardt, was on stage in his place while another Innospec employee and car finalist held up her smartphone to let him watch through FaceTime.

When asked what it was like to win a car over video chat, Cromley replied “2020, go figure.” 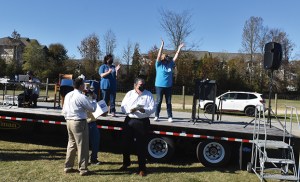 Susan Barnhardt throws her hands up as David Cromley, who she was representing on stage, is announced as the winner of the value of a new car from the Gerry Wood automotive dealership. Ben Stansell/Salisbury Post

To claim his car, Cromley plans on traveling to Rowan County, which he does four to five times a year when there’s not a global pandemic. Gerry Wood will be giving Cromley a $16,200 credit which he can use to buy any car on the lot.

Even though the car has been given away, the campaign will continue. Smith is confident that that the United Way will find a way to meet its goal.

“The work still goes on. As we looked at this early on, we knew in our contingency planning that we would likely get to the end and still have more work to do,” Smith said. “I think over the next month or so, we’re going to see a few select folks come out and support us and make sure we get to goal. I’ve always been impressed by this community, no matter what, they step up. I’m not worried because they always do.”

A GoFundMe has even been established to help it make a final push.

The money currently raised will be enough for the United Way to honor the commitment it has to its 19 community investment partners.

“All of the commitments are now covered and that’s the important part,” Smith said.

SALISBURY — Students at Catawba College don’t have a class pet, but they have adopted an Oscar. Nicknamed for the... read more