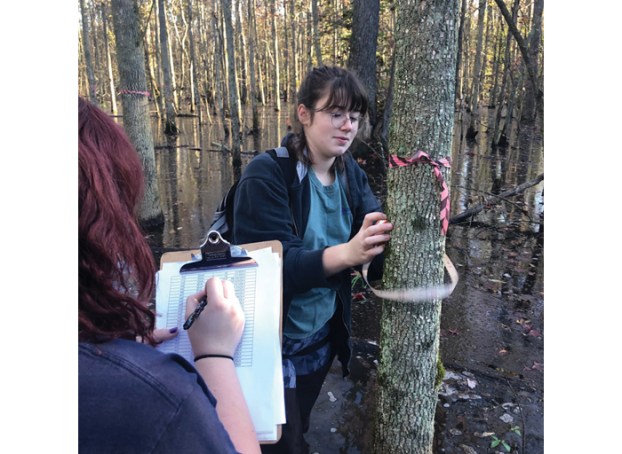 SALISBURY — In five years, most of the green ash trees that compose the leafy canopy in the Catawba College’s Fred Stanback Jr. Ecological Preserve will be dead.

The population of ash trees in the preserve is currently being decimated by the emerald ash borer, an invasive, metallic, green beetle that has already eaten through millions of ash trees in Michigan alone and has started to spread across the country.

Discovered in the Detroit area around 2002, the beetle is believed to have hitched a ride to the United States on wooden packing materials from China. Since arriving in the U.S., the beetle has begun to diffuse at a rapid pace. Although the beetle was in North Carolina by 2013, it wasn’t officially identified in Rowan County until last year.

Over the previous two years, several Catawba College students have been studying the impact the borer is having on the Fred Stanback Jr. Ecological Preserve. Madison Kluge, Arilyn Lynch and Matthew C. Rodriguez presented their findings at this year’s virtual state of North Carolina’s Undergraduate Research and Creativity Symposium.

The trio’s findings don’t reflect a bright future for the green ash trees that have long been a staple of the marshy preserve. The green ash is a hardy species that is resistant to temperature changes and various soil pH levels, but it is vulnerable to the emerald ash borer.

“No joke, about 70% of the trees in the Catawba Preserve will be dead in the next two or three years,” said Jay Bolin, the Catawba professor who oversaw the students’ research.

According to the research conducted by Kluge, Lynch and Rodriguez, 68% of the trees in the preserve greater than 10 centimeters diameter at breast height are green ash. When Kluge and Bolin started studying the green ash trees in the fall of 2019, 20% were showing evidence of infection. Just a year later, in the fall of 2020, that number more than doubled to 54%.

While Kluge said she and Bolin predicted a large increase in the number of infected trees, they were surprised to see their prediction come true. Lynch, who joined the research project after Kluge, was taken aback by the jump in infected green ash trees.

“It’s pretty shocking to see so much of a difference in one year,” said Lynch, a junior double-majoring in environment and sustainability and biology. “Bolin and I are continuing the project next year and I believe most of the trees, if not all of the trees, will be dead in our ecological preserve.”

The emerald ash beetle infection starts when females lay their eggs in the crevices of ash trees. The larvae bore underneath the bark and feed on the tree, disrupting its ability to transport water and nutrients. By the time the adult beetle emerges in one or two years, the tree it has feasted on is dead or dying. A mark of the beetle is the D-shaped exit hole it leaves behind, which are visible on trees throughout the preserve. 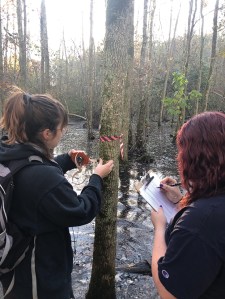 Under the direction of professor Jay Bolin, Madison Kluge and Arilyn Lynch observed ash trees in several different plots over a two-year period in the Catawba College Fred Stanback Jr. Ecological Preserve and determined how many had been infected by the emerald ash borer. Photo submitted.

Since there are no known predators to the emerald ash borer, applying insecticide to the soil around the tree is one of the only known methods to protect from the pest. But applying insecticides to the entire population of green ash trees in the ecological preserve isn’t practical, Bolin said.

“No one is willing to do widespread spraying,” Bolin said. “The damage would be worse if you tried to kill all of the beetles. You can drench the soil around the tree with insecticide, but you’d have to do it every year. It’s only worthwhile if you would have a tree that could fall on your house.”

With no solution to the problem in sight, the green ash trees in the preserve are destined to be wiped out. They’ll soon be replaced by other trees growing in the area, such as maples, elms and sweet gums. The change in the preserve’s makeup will impact its water levels, Kluge said.

“When there’s no ash trees in that ecosystem, there won’t be as much water sucked up from the ground from the ash trees so that will impact what kinds of animals are living there as well because it will become more of a swampy area,” Kluge said.

Kluge doesn’t view the loss of the ash trees as a cause for concern, only a sign of a changing forest.

“There’s always another species that’s going to take advantage of the space that’s being lost from the dying ash,” said Kluge, a senior majoring in environment and sustainability. “It’s not completely hopeless. It’s going to be a different forest, that’s for sure, but it’s going to be really cool to see.”

Kluge said the crew researching activity in the preserve have already started to see more maple, elm and sweet gum saplings begin to sprout, poised to take the void left by the dying green ash trees.

There are ways for people to become involved in protecting endangered trees and other wildlife like green ash trees. Kluge said that she recommends people visit citizenscience.gov to find out how they can contribute to conservation projects. She also said that people can use the Seek by iNaturalist app to learn more about the natural world around them.

By Mark Wineka For the Salisbury Post The Lipscomb family has been building gingerbread houses at the Rowan Museum’s annual... read more