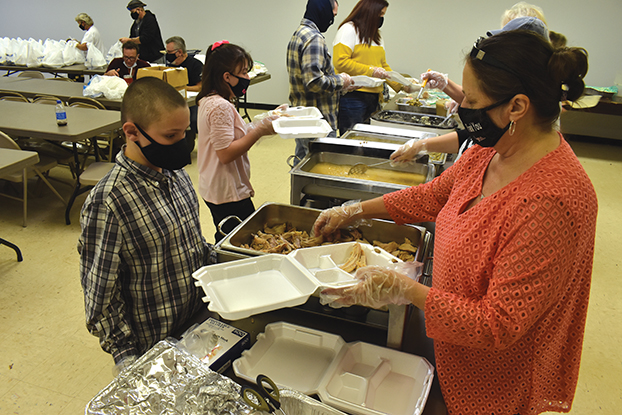 “We just want to give God the glory and do some outreach to the community,” said Ponds, who has been the church’s pastor for the past 21 years. “We wanted to help those that may be a little less fortunate. That’s the main thing.”

The meal was free for anyone who wanted to participate and included turkey, mashed potatoes, gravy, green beans, corn, a roll and dessert. Ponds said members of the congregation come together to provide the food.

Although most of the congregation started filtering in around 9 a.m., Ponds arrived early to start on the green beans and corn. For more than a decade, Ponds has participated in Providence Baptist Church’s Thanksgiving meal give-away. But he said they’ve never hosted one quite like this.

Instead of having community members and the congregation gather in the fellowship hall to enjoy the meal together, the church decided to transition to a drive-thru method this year. Tables normally occupied by talking, laughing and eating people were instead filled with plastic grocery bags stuffed with to-go containers. Those containers were either handed to people who drove by in cars or were delivered directly to people’s homes.

Standing around a buffet table filled with hot trays of food, church members worked in near perfect unison to dispense the staple dishes of Thanksgiving into containers. It didn’t take long until an entire table was brimming with meals ready to go.

Manning the turkey distribution station at the front of the buffet line was Mary Parker, a longtime member of the church. Parker said that she remembers when the church started giving out free Thanksgiving meals about 15 years ago. Despite the pandemic, Parker said it was important for the church to continue the tradition.

“We knew it was going to be different this year, but we decided we were going to try to do it anyway,” Parker said.

In the first couple years of the Thanksgiving meal giveaway, Ponds said that they only distributed about 50-70 meals. It didn’t take long for that number to increase, until the church was giving away several hundred. In addition to giving meals away to any member of the community who needed one, Ponds said that they started delivering batches of meals to nearby senior care facilities.

Ponds said that they wouldn’t distribute quite that many this year, but would still send out over 100 Thanksgiving feasts.

Cheryl Goodman, who was a critical factor in the church starting the Thanksgiving tradition, said that no matter how many meals they ended up handing out, it felt good to give people something to look forward to on a holiday.

“Whoever we feed is a blessing to us,” Goodman said.