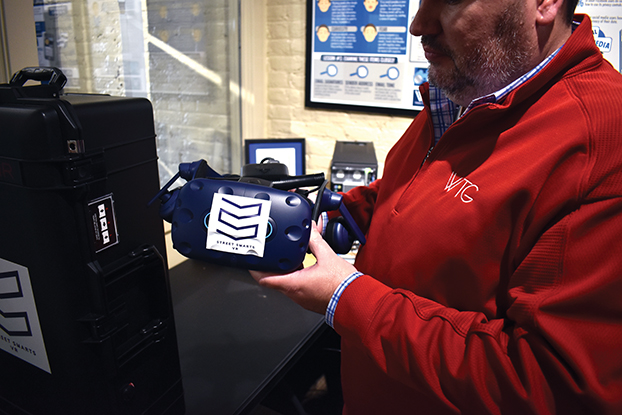 Brad Walser, the owner and president of Walser Technology Group, holds a Street Smarts VR headset, which is used by law enforcement and members of the military for virtual training. Ben Stansell/Salisbury Post

SALISBURY — Justin Gray may just be a senior at Catawba College, but the work he’s doing as an intern with Walser Technology Group is making an impact across the globe.

For the past semester, Gray has assembled, tested and packaged virtual reality training kits that have been sent to law enforcement and military bases around the country and world.

“One of my first thoughts when I found out what I was going to be doing there was just how relevant it is right now with a lot of the things that are going on,” said Gray, an information systems major who largely came to Catawba for its eSports program. “It makes it seem more impactful, more important.”

The training kits give members of law enforcement and the military the chance to virtually immerse themselves into various high-risk situations, from a contentious traffic stop to crisis response and intervention.

“How do you train them? You can build scenarios where you hire actors and actresses, you can shoot training videos and have people watch them in 2-D,” said Brad Walser, the owner and president of Walser Technology Group. “This virtual reality really gives them an immersive training experience. It allows them to make it feel like they’re in that situation.”

Everything is manipulatable about the virtual scenarios. The environment can be changed from urban to rural, the weather can be snowing or sunny and the time of day is up to the user. And depending on what the person using the virtual reality kit decides to do in a certain scenario, the outcome can change.

Walser said it’s a cost-effective way to train officers or soldiers without putting them in harm’s way.

The downtown Salisbury tech company began working on the project over a year ago. It came about through a partnership with Dell, the maker of the virtual reality hardware, and Street Smarts VR, the company that produces the software for the product.

“They needed someone to help put all of the parts and pieces together in a package, do some acceptance testing and get them shipped out to different Air Force bases or military facilities or different police departments or even local community colleges in North Carolina that will train local police forces and county government forces,” Walser said.

Walser Technology Group becomes involved in the process when it receives the 30 or so components of the virtual reality kits. The kits feature an array of monitors, webcams, tripods, headsets and even prop guns and tasers that mimic the weapons commonly carried by police officers or soldiers. 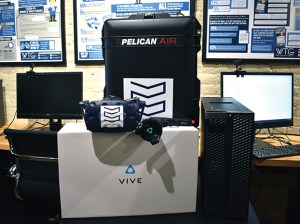 In total, the virtual reality training kits come with about 30 components, including a headset and prop gun. Ben Stansell/Salisbury Post

Gray assembles the virtual reality system, loads in the software and tests everything to ensure it is working properly. Gray said he can prepare three units for customers in just a couple days while only working part time. From there, the kits are shipped out to law enforcement offices and bases.

“We’ve had one in South Korea, we’ve had one that had gone to Saudi Arabia,” Gray said. “It is interesting to see where everything is going.”

Walser said they’ve sent out dozens of kits in the past year and he’s seen the popularity of virtual reality systems increase in that time.

“I feel like in the last year, sales have definitely picked up,” Walser said.

He attributes the increase in the product’s popularity both to Street Smarts VR adding more features and due to the “awareness to officers that they need training for this information.”

Walser Technology Group recently brought another intern on to help with the project. There are also several full-time employees at the company helping out with the process.

Walser said he’s glad his company is a part of a project that is making a “global impact.”

By Natalie Anderson natalie.anderson@salisburypost.com SALISBURY — It was a week plagued by a list of grim milestones reached in both... read more