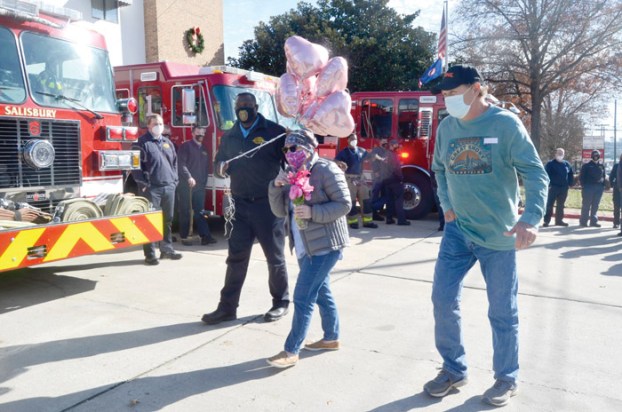 Shavonne Potts/Salisbury Post Tammy File, center, walks in front of fire station No. 1 with firefighter Wesley Jackson, left, and her husband, Doug. Tammy is an administrative assistant at the fire department and she was surprised Wednesday by a celebration for the end to her chemotherapy.

SALISBURY — Tammy File, the Salisbury Fire Department’s administrative assistant, stood outside of Station No. 1 on Wednesday to ring a bell that signaled her final round of chemotherapy.

She was joined for the occasion by dozens of firefighters and other personnel, who surprised File by gathering in front of the station with flowers and balloons.

File discovered a lump in her breast in June. By July, she was starting chemotherapy at the Wallace Cancer Institute.

“I usually go to my mammograms every year but because of COVID-19 it was delayed a little bit. I found a lump and so I told my doctor I needed to come up and see her,” File said.

File continued to work, sometimes from home and sometimes half-days. A few firefighters heard Wednesday was File’s last treatment and wanted to support her.

As she got out of her car Wednesday, File told her husband he couldn’t park in front because the firefighters were headed to a call. At first, she was confused about the scene. Then, she was overcome with emotion as she saw the men and women assembled with balloons and flowers.

“I work with the most wonderful people in the whole world,” she said.

File had no idea the real reason her husband stepped out of the office was to coordinate her arrival at the station rather than to take her to the doctor.

The original plan was to greet her with a parade of fire trucks in the parking lot of the cancer institute after her final treatment. However, she’d begun to experience numbness in her hands, which is sometimes a side effect of chemotherapy. Because her cancer was smaller, it meant she could discontinue treatment.

She was finished early. So, her husband, Doug, and the firefighters switched gears to welcome her at the station several hours earlier than expected. Doug, who is a cancer survivor also, said it was hard to watch his wife undergo chemotherapy and he would’ve much rather trade places with her.

Firefighters Wesley Jackson and Adrian Gantt along with Capt. Lauran McCulloh helped coordinate the surprise. McCulloh said they were just going to decorate File’s office but decided to do more.

Some of the firefighters took a break from training to support and celebrate the end of File’s treatment.

Jackson said many of the firefighters know a cancer survivor or someone currently undergoing treatment.

He said File is the backbone of the whole fire department operation and is there. The fact that she continued to work is a testament to her dedication and shows what kind of person she is, Jackson said.

“She mustered up every bit of strength she could to make sure she came in to help us,” he said.