The city of Madison, Wisconsin, has named former Salisbury Police Deputy Chief Shon Barnes as its new chief, according to a statement from the city’s police and fire commission.

Barnes left in August to work as the director of training and professional development for the Civilian Office of Police Accountability in Chicago.

“Following a rigorous, comprehensive process and after thorough deliberations, the PFC has selected Dr. Shon F. Barnes to be our chief of police,” said a statement from the City of Madison Board of Police and Fire Commissioners. 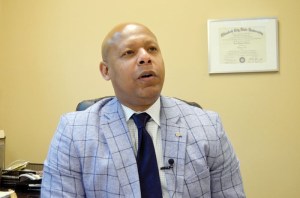 The police and fire commissioners is the hiring body for the position, which conducted final interviews in closed session earlier this month.

Barnes began with the city of Salisbury in April 2017 after nearly 20 years with the Greensboro Police Department where he served as captain.

The statement said community input has been the foundation of the process.

“The PFC is grateful for the input that it received. The COVID-19 pandemic presented unique challenges for the PFC, and the PFC adapted its methods to obtain community input,” the statement said.

Barnes has since accepted the city’s offer and is expected to begin in several more weeks, according to the Wisconsin State Journal.

Barnes will be the city of Madison’s third Black police chief, according to the Wisconsin newspaper.

SALISBURY — Passersby on Tuesday night may have heard sounds of joy inside Novant Health Rowan Medical Center when the... read more