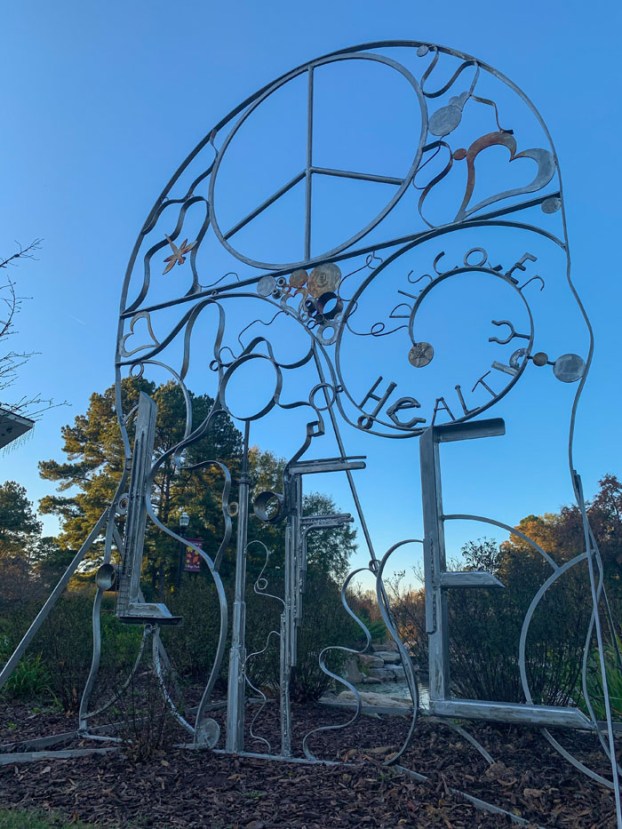 One of Tom Risson's sculptures that has been installed in Kannapolis. Submitted photo

The City of Kannapolis has added two sculptures to its public arts program. The 10-foot steel sculpture “Love” has been installed at the Kannapolis Train Station on Main Street after purposefully being aged to give it a sense of time and place in the historic downtown.

The second sculpture is located at Village Park near the fountain and embodies the city’s brand, “Discover a Healthy Life.” This piece is also 10 feet tall and 83 inches wide. Both sculptures are expected to become selfie location favorites.

“It is incredible to see how vibrant the city’s downtown has become in such a short period of time. Everywhere you look you see people enjoying a walk, a run of cycling. New businesses are opening. The energy here is an inspiration to me and I wanted to capture that with these sculptures,” Risser said in a news release.

Additional sculptures by Risser that were donated by members of the community can also be found along West Avenue.

An engineer by day Risser is president of U.S. Bottlers Machinery Company in Charlotte. He is a graduate of Guilford College with a degree in mathematics and engineering and an electrical engineering degree from North Carolina State University.

Twenty years ago, he began taking leftover materials from his company’s products and formed them into sculptures. As a self-taught artist he has experimented with many different types of medium, including fused glass, polycarbonate, stone, paintings, shotcrete and photography.

Now an award-winning sculptor you can find his works in many cities, galleries, private collections, and businesses across the United States.

In 2016 he had a heart attack and subsequently heart bypass surgery. Since then he has incorporated hearts into many pieces of his work, which are seen in the Kannapolis pieces. The hearts are sometimes very visible and at other times they are more hidden.

He is also known for skateboarding and is the creator of many local facilities including WXW Sk8, The Blair Witch Ramp, Whip Snake Park and Tom’s Bowl. He has been featured on HGTV, Offbeat America, ESPN: Tony Hawk’s Giant Skatepark Tour and Carolina Traveler.

He and his wife, Daisy, live in Marvin and they have a son, Sam, and a daughter, Carson.

If you would like to make a donation for public art to the City of Kannapolis, contact Annette Privette Keller, Director of Communications at aprivettekeller@kannapolisnc.gov or 704-920-4311.