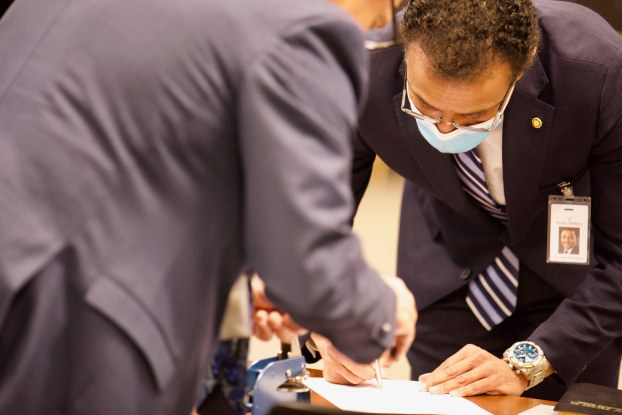 SALISBURY — Superintendent Tony Watlington was sworn in on Monday at the Rowan-Salisbury School’s regular meeting.

Watlington was tapped to take over for the district in December and took the reins from Associate Superintendent Kelly Withers, who was serving as interim superintendent following Superintendent Lynn Moody’s retirement at the end of 2020. Watlington comes to RSS from Guilford County Schools, where he most recently served as chief of schools, a deputy to Superintendent Sharon Contreras.

Watlington was approved unanimously by the RSS Board after a search process that spanned a couple months.

On Monday, Watlington said he and his family began looking at homes in Rowan County and have already eaten at local barbecue restaurant The Smoke Pit.

He was sworn in in the presence of his sons and mentors. He stood at the front of the second floor conference room at Wallace Educational Forum with his sons and his hand on a Bible while Rowan County Clerk of Court Jeff Barger delivered the oath of office.

Watlington thanked the school board for his appointment and commended Withers for her work in the interim.

He committed to partnering to make the district’s special renewal status a success as well as the RSS mission to provide “extraordinary education every day.”

Watlington said he does not take the confidence placed in him by the board lightly quoted former president Lyndon B. Johnson, saying, “Education is the key which can unlock the door to the great society.”

Watlington will begin a district tour today and plans to visit each school and facility personally in the next few weeks. His first stops will be at the district’s transportation department and Carter Building before visiting Salisbury High School and all the North area schools.

This afternoon, the district will host a press event with with Watlington at which he will deliver remarks and take questions from members of the media.

Moody served as superintendent for seven years and oversaw initial implementation of renewal, which gives the entire district charter school-like freedoms, the acquisition of a $26.3 million federal grant to support renewal, construction of Wallace Educational Forum, a 1:1 device policy and pushed for consolidation of schools.

SALISBURY — Aid is on the way for businesses who are still dealing with the impact of the COVID-19 pandemic... read more