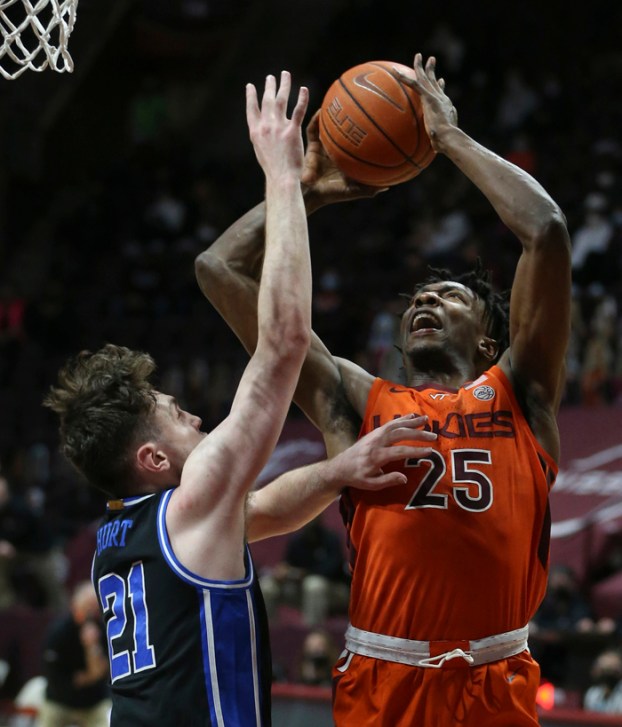 He told his Hokies to get tough and play on — and that’s just what they did.

Tyrece Radford had 18 points and 12 rebounds to lift No. 20 Virginia Tech over the 19th-ranked Blue Devils 74-67 on Tuesday night.

The double-double was the first of the season for Radford, who helped the Hokies (10-2, 4-1 Atlantic Coast Conference) jump to an 18-point, first-half lead and hold off Duke’s rally to win for the sixth time in seven games.

The Hokies had led from the tip, making six of their first eight shots and shooting 63.3% (19 of 30) in the first half mainly behind Radford.

Duke, though, cut the deficit to 56-55 after Matthew Hurt hit a corner 3-pointer with 13:12 remaining. At that point, Young decided not to call a timeout, letting his team continue to play.

“They’re really good,” Duke coach Mike Krzyzewski said of the Hokies. “Mike’s team, they know who they are.

“In the first half, they really hit us hard,” he added. “They played great defense, really strong, physical. They played tough, and it knocked us back. We have not played in an ACC game like that, our players, especially the freshmen.”

The Hokies have three wins over ranked teams this season and continue to enhance their NCAA Tournament resumé.

Jalen Johnson, the Blue Devils’ third-leading scorer coming into the game (11.5 ppg), had missed Duke’s past three games with a foot injury, but entered the game with 16:23 left in the first half. He scored two points in four minutes.

Virginia Tech plays at Wake Forest — winless in ACC play — on Saturday, and a win there combined with the victory over the Blue Devils should propel them up the Top 25 poll. Duke could fall out.

The Blue Devils play at Pittsburgh on Tuesday.

The Badgers (10-3, 4-2) struggled to finish plays around the basket early on, and the Wolverines had six blocked shots in the first half alone.  Franz Wagner had 15 points and 10 rebounds.

Kansas trailed by three in the closing seconds and had possession, but Oklahoma State’s Bryce Williams stole the ball, drove the length of the floor and and dunked as time expired.

The Cowboys blew a 19-point lead in a loss to West Virginia eight days earlier and squandered a 16-point lead in the second half of this one before scoring the game’s final eight points.

Williams scored 17 points and Avery Anderson III added 14 for the Cowboys (9-3, 3-3 Big 12). It was the fifth time in the past eight tries that Oklahoma State has beaten the Jayhawks at Gallagher-Iba Arena.