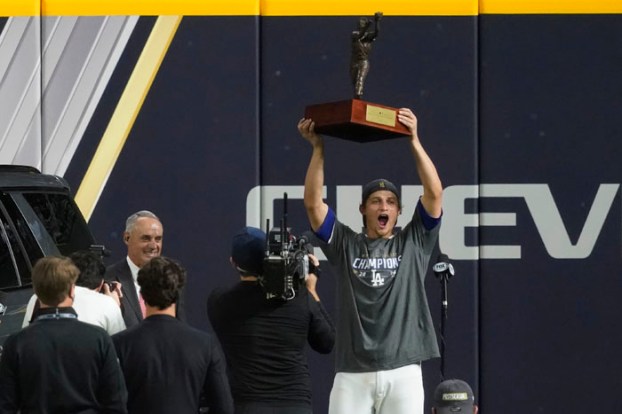 NEW YORK (AP) — Corey Seager was among 112 players who agreed to one-year contracts Friday, leaving just 13 to swap salary arbitration figures during a slow offseason in the aftermath of the financial carnage caused by the coronavirus pandemic.

Francisco Lindor, Kris Bryant and Cody Bellinger also agreed to deals that came on the deadline day for players and teams to exchange proposed 2021 salaries.

Seager and Bellinger got big raises after helping the Los Angeles Dodgers win their first World Series title since 1988. Bellinger, an outfielder and first baseman, agreed to $16.1 million. Seager, MVP of the NL Championship Series and World Series, agreed to $13.75 million.

Lindor, the star shortstop acquired last week by the New York Mets from Cleveland, got the largest of the deals at $22.3 million. The Mets hope to sign him to a long-term contract that would prevent him from becoming a free agent at the end of the season. Lindor says he does not want to extend talks past when he starts spring training next month.

Lindor’s deal is the fourth-highest one-year contract for an arbitration-eligible player, trailing Mookie Betts ($27 million with Boston last year), Nolan Arenado ($26 million with Colorado in 2019) and Josh Donaldson ($23 million with Toronto in 2018).

Bryant agreed to $19.5 million with the Chicago Cubs. He, too, can become a free agent after the season, falling one day shy of eligibility at the end of the 2020 season. The third baseman lost a grievance last offseason that claimed the Cubs delayed his call-up as a rookie in 2015 to delay his free agency by a year.

Among players set for hearings, the most prominent is Houston shortstop Carlos Correa. He asked for a raise from $8 million to $12.5 million, and the Astros offered $9.75 million.

Los Angeles Angels two-star Shohei Ohtani, who slumped to .190 at the plate and pitched a total of 1 2/3 innings while coming off Tommy John surgery, asked for $3.3 million and was offered $2.5 million.

For players who don’t settle, hearings before three-person virtual panels will be scheduled for Feb. 1-19.

Waking up in a historically slow free agent market, the Yankees reached a deal with right-hander Corey Kluber worth $11 million for one year and agreed to a $90 million, six-year contract to keep AL batting champion DJ LeMahieu, a person familiar with the negotiations told The Associated Press.

The person spoke on condition of anonymity because each agreement is subject to a successful physical.

Traded after the season to Texas, Kluber tore a muscle in his right shoulder in his Rangers debut on July 26, finishing his season after one inning. The injury did not require surgery, and he held a workout for scouts on Wednesday.

He joins a rotation headed by Gerrit Cole that also includes Deivi García, left-hander Jordan Montgomery and, at some point, Luis Severino when he returns from Tommy John surgery last Feb. 27. It is not clear whether the Yankees will re-sign Masahiro Tanaka, who became a free agent. In addition, Domingo Germán is expected back from a domestic violence suspension that caused him to miss last season.

LeMahieu, who turns 33 in July, became the first player to win undisputed batting titles in both leagues. He won his first AL batting title last year at .364, the highest average for an AL batting champion since Minnesota’s Joe Mauer hit .365 in 2009, after winning the NL championship with Colorado in 2016.

The Chicago White Sox completed a $54 million, three-year deal with the former Oakland closer Liam Hendriks, a contract that includes a $1 million signing bonus and salaries of $11 million this season, $13 million in 2022 and $14 million in 2023. The White Sox hold an unusual $15 million option for 2024 with a $15 million buyout that would be paid in 10 equal installments from 2024-33.

Houston also finalized a $12.5 million, two-year deal with reliever Pedro Báez that includes a club option and could be worth $19.5 million for three seasons. Last season he was 0-0 with a 3.18 ERA and two saves in 18 appearances for the World Series champion Dodgers.

The Los Angeles Angels also announced a $1.5 million, one-year agreement with catcher Kurt Suzuki, who spent the past two seasons with Washington.