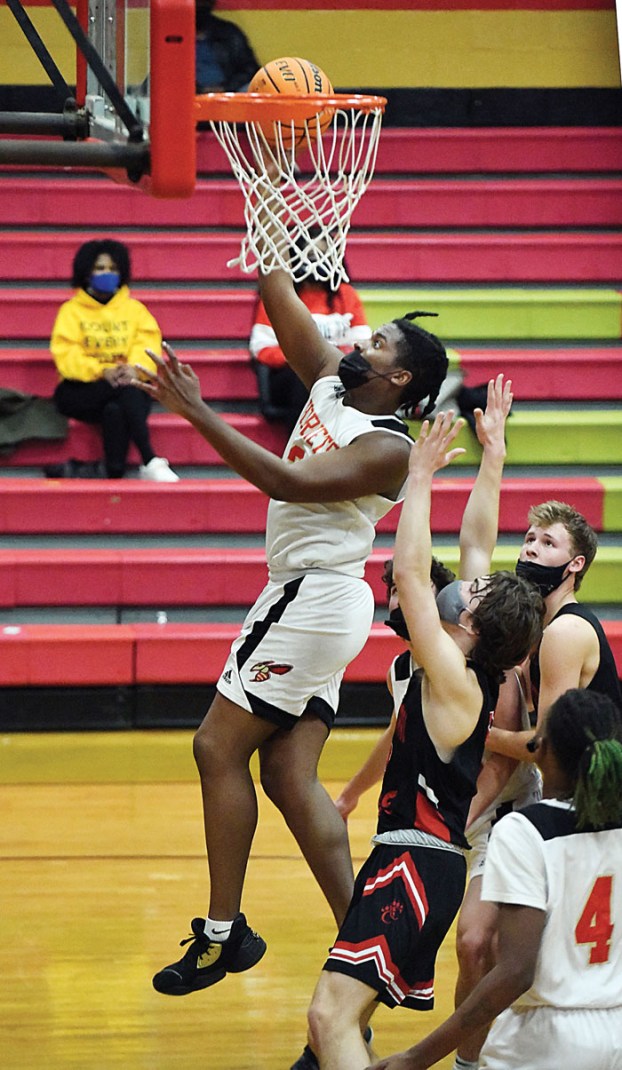 Salisbury’s Nate Brown goes up for a basket against Chatham Central. photo by Wayne Hinshaw, for the Salisbury Post

Tenth in a series of reports on local basketball teams.

Playoffs: Lost 60-59 to Forest Hills in second round

SALISBURY— Despite a slow start, Salisbury’s boys are certain to be an interesting team.

For one thing, how long will it take before football man-child Jalon Walker tears down a backboard on a dunk?

For another, how long will it take before the Hornets start making key three throws and stop driving coach Bryan Withers crazy?

“We need to shoot free throws for days,” Withers said.

The free ones will start falling eventually and there’s enough talent on hand in the Salisbury gym to make every Central Carolina Conference game exciting. Maybe the Hornets will figure out how to win most of them.

Withers is guiding an interesting mix of old and new. It’s a team with quite a bit of quickness, but most of the combinations Withers uses aren’t very tall.

There are a lot of bodies on hand — at least 15 on varsity. Withers figures he’ll need all of them.

“As fast as we play and as hard as we play, we need the depth,” Withers said.

A pair of freshmen guards are too skilled not to play quite a bit right away, but the go-to guy is still senior Nate Brown.

Salisbury no longer has Zay Kesler, who accounted for 25 percent of the team’s scoring in 2019-20. That means Brown, who averaged 10.7 points last season, will have to look to score more. He’s capable of getting 15 to 20 every night. He’s one of those guys with a pretty big body, but nimble feet and a very soft touch.

“We need to get the ball to him more,” Withers said.

The other probable go-to scorer, long-range specialist Cameron Stout, missed the first two games with illness but is now back in the lineup.

It’s not a stretch to say that Stout, a junior who can get scalding hot from outside, would’ve made the difference in the overtime loss to Forest Hills, as well as the double-overtime loss to Chatham Central, in which the Hornets somehow squandered a 23-point lead.

“Cam has put in a lot of offseason work with (former North Rowan star) Ed Suber, and he’s really improved his defense, passing  and ball-handling,” Withers said. “He’s always been able to shoot.”

Stout averaged 9.9 points per game last season. His numbers included outbursts of 21 and 26 points. Defenses generally play zone against the Hornets, but it’s hard to play zone when Stout gets a hot hand.

Witherspoon poured in 17 when Salisbury got its first win of the season on Friday at Thomasville.

Jalon Walker, who has his football recruiting list pared down to Ohio State, North Carolina, Georgia, Auburn, Alabama and Clemson,  has never been a big scorer, but his defense and rebounding make him an important player. He just has to stay out of foul trouble. He’s so strong, wherever he goes, he scatters lesser bodies like autumn leaves. Sometimes officials just see bodies being redirected, so he draws quite a few whistles.

Walker has already turned in a double-double and his 15 points against Thomasville was very encouraging.

“With basketball coming before football this season, we’ve had Jalon more than we’ve ever had him,” Withers said. “He’s put more time into basketball than he ever  has. He’s such an athlete that he has a chance to make a very big jump this season. His confidence and his leadership will be very important for our success.”

Senior transfer Javon Smith was a focal point in Carson’s offense last season, as the drive-and-dish guy who set up their shooters. He also played a significant scoring role for the Cougars with 14.7 points per game. Salisbury has more ballhandlers than Carson did, but fewer shooters, so Smith will  be looking to finish more drives and draw more fouls. He’s also quick enough to be a force when the Hornets look to pressure defensively.

“He’s always in the gym,” Withers said. “We play a different style from Carson, but he’s embracing it. He’s fitting in. I like the chemistry.”

Smith was off to a solid start, but an injury in Salisbury’s third game forced him to miss Friday’s CCC win at Thomasville.

Geter is a lefty. His shot is a work in progress, but his quickness is going to make him a factor. He can get into the lane and create for teammates.

“Our freshmen guards are talents,” Withers said. “But it’s a jump from middle school to the league we play in. There will be ups and downs.”

Another young guard, sophomore Jalen Chunn, is one of the team’s better outside shooters.

“We’re definitely guard-heavy,” Withers said. “But he can help us.”

Zeb Harry, a senior guard, has a nice-looking shot and will be counted on as another 3-point threat.

JyMikaah Wells, Jackson Murphy, Will Webb, Prince Woodruff, Jude Lockhart and Nick Antosek provide depth and hustle and there may be nights when Withers calls on everyone in the first half.

Withers is a veteran coach who won’t panic over early non-conference losses, but, at best, this will be a strange season. It’s a condensed season that will wrap up as far as the regular season on Feb. 19.

There wasn’t the usual, patient, careful team-building process due to the pandemic. Everyone has jumped right into the fire.

“These are tough times,” Withers said. “Things are going to pop up, but I’m glad we’re getting a chance to play. I know our guys want to compete.”

Withers has always liked the 10-team CCC. This will be Salisbury’s last season in the CCC as we’ve come to know it. The Hornets will be placed in a smaller league next season, a mix of 1A and 2A squads.

“This conference has been fun,” Withers said. “There are great coaches in this conference who really make you work. Our league was good last year and I believe it will be better this time.”

The Hornets experienced nine tight losses among their 10 defeats in 2019-20. They were better than their 17-10 record sounds.

Maybe this is the season the close ones in the CCC bounce the Hornets’ way.

“We’ve already gone through a lot of challenges early, but I believe challenges are good for you,” Withers said.