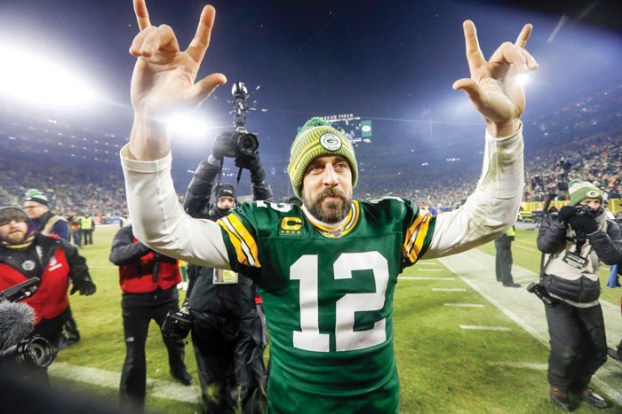 Aaron Rodgers and the Green Bay Packers are making a return trip to the NFC title game and this time they get to play it at home.

Rodgers threw for two touchdown passes to tie an NFL record and became the first Packers quarterback to run for a score in the playoffs since Bart Starr in the Ice Bowl in the Packers’ 32-18 win Saturday over the Los Angeles Rams in the first game this season with fans in Green Bay.

“It’s special,” Rodgers said. “There’s absolutely nothing like it. We have really missed that part of this experience. To run out of the tunnel tonight with fans was unbelievable. It’s hard to explain how much the presence means on the field and just having that energy from the crowd.”

Now Rodgers will get to play in front of the home crowd in the NFC title game for the first time in his career, having gone on the road the previous four times he reached the game, including last season at San Francisco.

The previous time the Packers hosted the conference championship game came in Brett Favre’s final start for Green Bay at the end of the 2007 season in a 23-20 overtime loss to the Giants.

Rodgers and the Packers will host the winner of today’s game between Tom Brady and the Tampa Bay Buccaneers and Drew Brees and the New Orleans Saints in the NFC title game Jan. 24.

Rodgers and the Packers started fast by scoring on their first five drives of the game and then he put it away with a 58-yard TD pass to Allen Lazard in the fourth quarter.

Rodgers had earlier thrown a 1-yard TD pass to Davante Adams and joined Joe Flacco as the only players to throw at least two TD passes in eight straight playoff games.

Rodgers also ran for a score when he eluded Leonard Floyd with a pump fake before running it in from 1 yard. No Packers QB had run for a TD in the playoffs since Starr’s iconic sneak that beat the Cowboys in 1967 and sent Green Bay to a second straight Super Bowl.

The Packers gained 484 yards against the stout Rams defense that wasn’t at its best with Aaron Donald limited by injured ribs. Green Bay allowed no sacks and committed no turnovers. “It was all about execution,” Rodgers said. “Frankly it could have been a few more. I had a couple rough throws, we had a couple of drops. But I’m just so proud of our guys, the way we battled.”

Cleveland’s reward for its first playoff win in more than a quarter century was a trip to Kansas City to take on Patrick Mahomes and the defending Super Bowl Champions.

The Browns have ended a few droughts the past few weeks, getting into the playoffs for the first time since 2002 and then winning their first playoff game since the 1994 season with a 48-37 victory at Pittsburgh despite being without coach Kevin Stefanski and several key contributors because of COVID-19 protocols.

Baker Mayfield and crew will be at close to full strength this week, but will have a much tougher time against a Chiefs team that has lost only once in its past 24 games with Mahomes starting.

This is the first playoff matchup in NFL history with two starting quarterbacks in their 40s with the 43-year-old Brady facing the 42-year-old Brees.

The two quarterbacks are the most prolific ever to play the game with Brady ranking as the all-time leader in TD passes and ranking second in yards, while Brees leads in yards and is second in TDs. The playoff results have been much different, with Brady making a record nine Super Bowls with six titles, while Brees won in his only trip to the title game. But Brady’s past success was all in New England and now he’s with a different franchise.