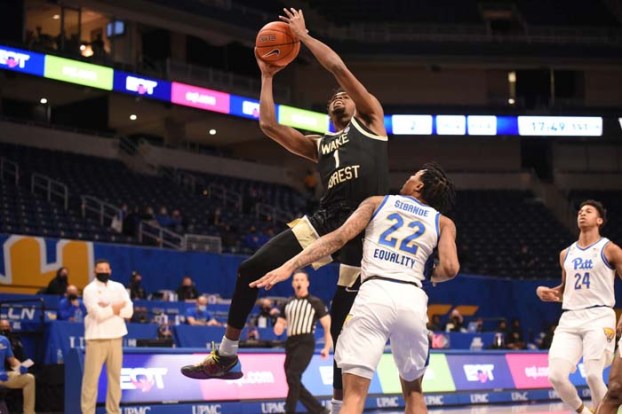 Champagnie gave Pitt the first double-digit lead of the game on a 3-pointer with 5:21 left for a 58-46 lead. The Panthers led by at least 10 points the rest of the way.

Champagnie recorded his league-leading 13th double-double of the season for Pittsburgh (10-10, 6-9 Atlantic Coast Conference), which matched its conference win total from last season.

Pitt outrebounded Wake 42-23 and scored 28 points in the paint.

Pitt is scheduled to face Clemson in a regular-season finale on Saturday. Wake Forest will attempt to break a six-game losing streak when it faces Georgia Tech on Friday.

Mitchell scored four of Baylor’s 13 points in overtime and finished with 20. Matthew Mayer had a season-high 18 points for the Bears. Taz Sherman came off the bench to score a career-high 26 points for the Mountaineers.

ANN ARBOR, Mich. (AP) — Andre Curbelo scored 11 of his 17 points in the first half, and the Illini dismantled the Wolverines with a smothering defensive performance.

Playing again without injured star Ayo Dosunmu, the Illini (19-6, 15-4) kept Michigan from clinching the Big Ten title and boosted their own chances at a No. 1 seed in the NCAA Tournament. Trent Frazier led Illinois with 22 points, and Kofi Cockburn added 12.

TUSCALOOSA, Ala. (AP) — Jaden Shackelford scored 23 points, made five 3-pointers and helped the Crimson Tide quash a second-half threat in the victory over rival Auburn.

Alabama had just secured its first SEC title in 19 years at Mississippi State over the weekend and followed that by completing its first season sweep of Auburn since 2014-15.

Herbert Jones had 10 points, nine rebounds and six assists for the Tide, including a coast-to-coast dunk in the first half. John Petty and Jahvon Quinerly each scored 11 points.

COLUMBIA, S.C. (AP) — Moses Moody tied his career high with 28 points and the Razorbacks won their 10th straight in the Southeastern Conference.

AMES, Iowa (AP) — Kai Jones came off the bench to score a season-high 17 points and lead four Texas players in double figures, and the Longhorns pulled away from Iowa State early in the victory.

LUBBOCK, Texas (AP) — Kyler Edwards scored 17 of his 20 points in the first half to help the Red Raiders roll  over TCU.

The Red Raiders (16-8, 8-7 Big 12) followed a nine-point home victory over No. 15 Texas with another strong effort to answer a season-worst three-game losing streak.

Today’s Atlantic Coast Conference men’s basketball game between No. 22 Virginia Tech and visiting Louisville has been canceled following a contact tracing review within the Hokies’ program.

The Cardinals will close the regular season Saturday at home against No. 21 Virginia.