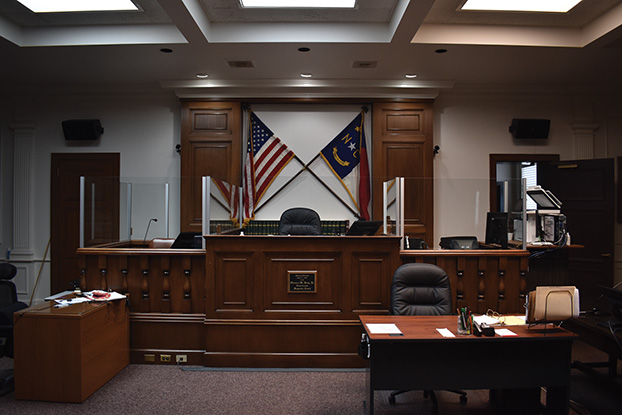 SALISBURY — With jury trials resuming this month at the Rowan County Courthouse, the local justice system will be wading into unfamiliar waters.

Although the trial process will largely remain the same, the implementation of masks, social distancing measures and other COVID-19-related factors are likely to exercise their influence every step of the way.

“This is a brave new world,” Senior Superior Court Judge Anna Mills Wagoner said. “We’ve never had to deal with anything like this before.”

Ian Mance, a lawyer and legal resource associate with the University of North Carolina’s School of Government, has spent the large part of the last year studying and writing about how COVID-19 could impact jury trials and, in particular, how they might impact the defense. Even after 12 months of looking at case law and talking to defense attorneys across the state, Mance said that it’s difficult to predict all the ways that the pandemic will affect jury trials.

“It’s been over 100 years since the courts have had to deal with a pandemic,” Mance said. “We can give our best educated guess as to how courts might work through these issues that are in many cases unprecedented. A lot of defense attorneys and attorneys in general are being faced with issues that are new.”

What is certain, he said, is that the pandemic will have some effect on every part of the process, starting with jury summonses.

With grand jury members selected last week and criminal jury trials set to start on March 15, summonses for trials this month went out weeks ago.

Brown is one of five district court judges tasked with reviewing requests for excuses or deferrals. If granted, a request for deferral will likely prevent the juror from serving for four to six months while an excusal would push back their service for two years.

Brown said that he hasn’t seen an overall increase in requests for excuses or deferrals, but there have been a noticeably higher number of requests related to medical conditions.

In guidance distributed by the North Carolina Administrative Office of the Courts, it was recommended that judges should allow for “more flexibility” when it comes to excusing or deferring individuals with heightened health-risks or who serve as primary caregivers for someone who is high-risk.

Brown said he’s already put that guidance into practice. Previously, Brown said, he’d be inclined to deny medical-related requests for excuses or deferrals if they weren’t accompanied with a note from a medical profession. Now, he’s being more lenient and will examine each person’s reason for a request regardless of whether there’s a doctor’s note. However, Brown cautions people against trying to use a medical concern as a get-out-of-jury-free card. He pointed out that the court keeps up with deferrals and excuses.

The increased likelihood of people requesting medical excuses or deferrals could hamper the court’s ability to obtain a jury that represents a “fair cross-section” of the community.

Davis said that he’s always worried about ensuring that there’s a fair cross section in trials, but that concern will be heightened during the pandemic.

“We also know that racial minorities, so the African American and the Latino communities, have been more impacted in terms of fatalities by COVID,” Mance said. “That could lead to underrepresentation on juries and that is going to be a real issue, I think, moving forward until the vaccines take hold.”

COVID-19 might impact the type of jurors who don’t request an excuse or deferral, but it could also have an effect on the way attorneys select jurors during the process known as voir dire.

Voir dire involves judges or attorneys interrogating potential jurors to determine their suitability to serve. For prosecutors and defense attorneys, the appropriateness of a prospective juror may differ based on what they think is best for their case.

A prospective juror’s opinion about the COVID-19 pandemic, Salisbury defense attorney Ryan Stowe said, is likely something that will come up since it could reveal more information about their political and social leanings.

Mance said he can think of a number of reasons why an attorney would want to ask prospective jurors about their thoughts on the coronavirus.

“I can imagine a scenario where a prospective juror reports but has real misgivings about service, because of their safety, they’re unvaccinated and they’re afraid,” Mance said. “Maybe the lawyer picks up on that and wants to explore that because they need to know if a juror gets selected for service is going to be able to focus on the evidence presented and not be preoccupied by concerns about COVID and catching it in the courtroom.”

Attorneys are generally allowed to question potential jurors as they see fit, but Wagoner said that the presiding judge has the discretion to tell attorneys to move on from certain lines of questioning if they deem them to be inappropriate.

An attorney might not even need to ask a potential juror about their attitude toward COVID-19, Stowe said, since the type of mask they’re wearing could give an indication.

Wagoner said prospective jurors will be asked to wear a mask from home to the courthouse, but masks will also be available to them when they enter the building.

The type of mask a juror is wearing will be one of the “millions of things” that Stowe said he’ll consider during the jury selection process.

“You also have to consider if a person does have a white surgical mask that (they received) from downstairs in the courthouse, that potentially means they came in without one,” Stowe said. “Then you have to think about what that could mean. Is someone so conservative that they wouldn’t want to wear a mask at all and were told they had to by law enforcement?”

Mance said he doesn’t anticipate masks being a major disruption to the jury selection process. However, he does think that masks could pose “a danger for courts” when it comes to witness testimonies during a trial.

Currently, masks are required to be worn at all times in courthouses across the state. However, the presiding judge in a trial will have the ultimate say on whether or not a witness on the stand can take off their mask to testify.

If a witness does remove their mask to testify, Wagoner said that the courthouse has taken every precaution to make it safe.

“The witness will be testifying from a witness stand, which is enclosed on three sides by a tall glass partition, just like the judge and the clerks are enclosed in that,” Wagoner said. “Hopefully, when one takes their mask off to testify they will be much further than six feet away from anyone.”

Mance said that there are constitutional concerns about a witness testifying while wearing a mask, specifically in criminal trials. In a blog he recently posted on UNC’s School of Government website, Mance wrote that “the use of face masks by testifying witnesses undermines a defendant’s right to confrontation under the Sixth Amendment and also may run afoul of a defendant’s right to due process under the Fifth and Fourteenth Amendments.”

If a witness is wearing a mask while testifying, it could disrupt the jury’s ability to read their reaction, Mance said.

Once again, even the type of mask a person is wearing could influence the trial.

“If I’m a witness and I wear an American flag mask or a Blue Lives Matter mask, which there is nothing wrong with either of those, potentially that would give someone more credibility to the jury than someone who wears a plain surgical mask,” Stowe said.

Stowe said that he would prefer each witness wear a solid color surgical mask when on the stand.

Mance said he expects there to be challenges from lawyers about witnesses wearing masks while testifying. He anticipates an entire body of COVID-19-related case law to develop over the coming years.

There are already rules in place and legal precedent about the type of political statements people can make with their clothing on trials. Wagoner said that everyone involved in the trial is encouraged to wear non-expressive clothing. Wagoner said that the courthouse’s COVID-19 policies are flexible and can be adapted as necessary.

SALISBURY — Rowan-Salisbury Schools has been continuing its work on competency-based education, and the school board will receive an update... read more