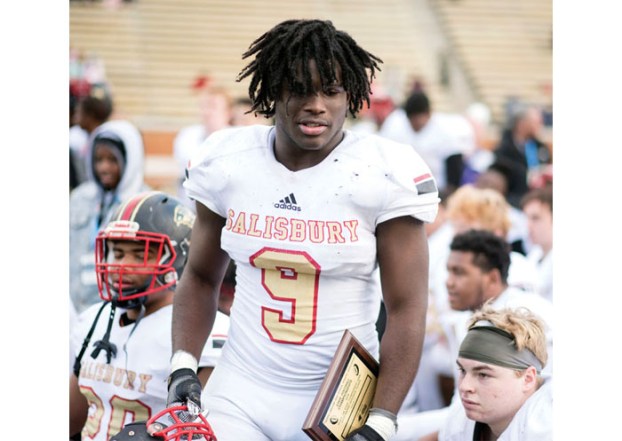 SALISBURY — Like Daniel Boone in the 1700s, Salisbury High senior defensive lineman Zae Clay plans to blaze a trail for others to follow.

Clay is headed to a school that is a national football power in the NAIA ranks. The University of the Cumberlands Patriots finished the 2019 season ranked seventh in the country in NAIA Division I and they were a preseason No. 5 in the nation in the fall of 2020 when their season got postponed. They’re competing in a short season now against Kentucky schools such as Pikeville and Campbellsville.

Recruiting never completely shuts down for a program like the University of the Cumberlands.

“I was on Twitter one day, just trying to stay positive about everything, and I got a message from the University of the Cumberlands,” Clay said. “That’s one of the schools our defensive line coach sent film out to, and they they really liked me. They wanted to know if I’d be interested in making a visit.”

The 230-pound Clay, 2019 Central Carolina Conference Lineman of the Year and Salisbury’s outstanding defensive player in the 2019 2AA state championship game, was more than interested.

There had been a lot of lookers when it came to recruiting Clay. A number of college coaches figuratively kicked the tires on Clay, but his 5-foot-11 height was a dealbreaker, no matter how much the kid produced on the field. The only firm offer Clay had when the University of the Cumberlands got involved had come from Division III Averett, in Danville, Virginia, a school that could provide some academic scholarship money, but not an athletic scholarship.

“Believe me, if Zae was 6-foot-3, his recruiting would have been done long ago,” Salisbury head coach Brian Hinson said.

Clay, the son of a single mother who works multiple jobs, needed a full athletic scholarship. That’s what he worked for for years before COVID made recruiting even more challenging for coaches, as well as players.

After that Twitter communication, Clay wound up making the trip to Kentucky to take a first-hand look.

His journey didn’t come at an ideal time, as far as weather conditions.

“It was snowing in Kentucky when I got there,” Clay said. “But that didn’t bother me. As far as the atmosphere, the football coaches, the facilities (including a turf field) and the school, I couldn’t have liked it any more than I did. It’s a long way (close to six hours), but I wasn’t turning down a full scholarship. For a kid like me, the full ride means everything. It means a college education. That’s been the dream for a long time. It lifted the pressure off me and took a burden off my family.”

It’s a surprisingly large school, the biggest private university in Kentucky, with more than 18,000 students. It offers degrees in 40 major fields of study.

Clay started playing football when he was 7 or 8, soaking up the basics and fundamentals with the Salisbury 49ers youth program.

People still talk about Clay’s five touchdown game at Knox Middle School, with scores on both sides of the ball. He was a fullback/linebacker in those days.

The Salisbury Hornets needed Clay most on the defensive line, so that’s where he has made his home. He’s started since his freshman year. He grew into a perennial all-county and all-conference player and developed a wider reputation last December with his three sacks against Shelby in the championship game.

“You may not know Zae is a player until the game starts, but then he starts making plays,” Hinson said.  “Not many people have the motor that Zae plays with. His first step is really quick and it makes him so hard to block. We’re so proud of him, He’s done the job on the field and in the classroom.”