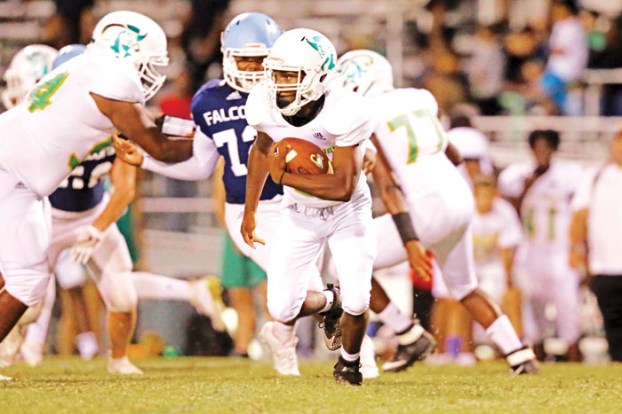 North Rowan junior Ronnie Fennell has been talked about for a while as the Cavaliers’ next outstanding running back. He showed on Friday what all the fuss was about.

Fennell, who is sharing carries with two-way studs Zay Davis and Jaharion Graham, enjoyed the first 100-yard rushing game and first multiple-TD game of his varsity career in the Cavaliers’ 56-8 win at Chatham Central.

“It felt amazing,” Fennell said of what amounted to a coming-out party. “I was glad to get the chance and glad to come through.”

Fennell has a reputation as someone who works hard. He has toiled on construction jobs since his freshman year.

He thrives on building things. Now he may be laying the foundation for a solid football career.

Football is a sport he took up relatively late. He wasn’t a YFL kid. His first runs came as a seventh-grader at North Middle.

“Good kid and a tough kid,” North head coach Nygel Pearson said. “He’s one of those guys who doesn’t say a lot, but he comes to work every day. You might not hear anything out of him, but he leads by work ethic.”

Fennell’s limited varsity snaps as a sophomore included a 61-yard scoring dash in the YVC romp against South Davidson. His most active game was six carries for 22 yards in the loss to West Rowan.

North entered this season with the plan of using long-time defensive stars Davis and Graham, both four-year varsity starters, in the backfield, but the hope was that Fennell was ready to make an impact.

Fennell was slowed by a bout with knee tendinitis, but he showed flashes when he gained 25 yards in his two carries in Week 2 against South Stanly.

“He was a little banged up early,” Pearson said. “We’ve been waiting for him to come around.”

In the first quarter of Friday’s game, Fennell reported in to give Davis a break and promptly broke a 34-yard scoring run on the next play.

He made a couple of steps inside, but then he spotted where the daylight was and veered right. North’s tall receiver Kendrell Goodes sealed off several defenders, and Fennell bolted, basically untouched, down the home sideline for a 34-yard touchdown.

“I followed the blocks, and the open lane was there,” Fennell said. “I went for it.”

While his first TD showcased his speed, his second TD run in the second quarter showed some power.

With North on the Chatham Central 14, Fennell  lined up to the right of QB Kyree Sims, took a well-timed handoff and angled sharply into the left side of the line. The big guys with those uniform numbers in the 50s and 60s opened a decent crease for him, and the first contact came at the 10. Fennell shrugged off that collision, blasted through a tag team of would-be tacklers at the 5, and trucked the last defender at the 2. That was four broken tackles and six points for the Cavaliers.

“More good blocks, and then I made some people miss,” Fennell said.

Fennell’s emergence is timely, as the Cavaliers have a huge game on Friday. It’s the marquee game of the week in Rowan, as the Cavaliers will be taking on unbeaten North Stanly with the Yadkin Valley Conference championship on the line. North Rowan (3-1) is 3-0 in the YVC. North Rowan has played only one home game this season and has been on the road for every league game.

All the Cavaliers are excited about playing a meaningful game at home. None are more excited than Fennell.

“Ronnie got his chance last week and he made the most of it,” Pearson said. “It was big to get him going,”