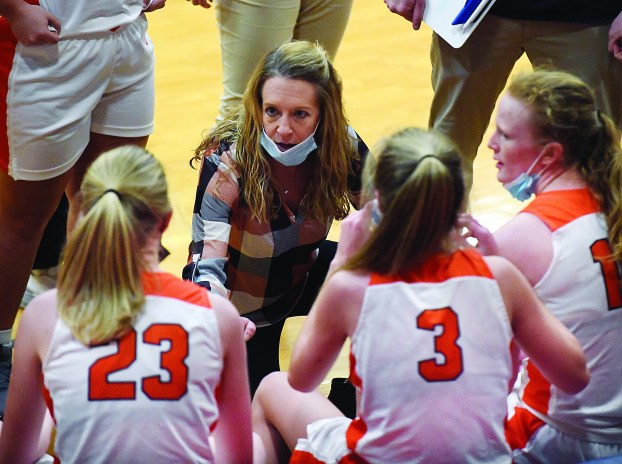 Carson's Coach Brooke Stouder led the Cougars to an undefeated season. File photo by Wayne Hinshaw, for the Salisbury Post

CHINA GROVE — Carson’s girls basketball team made what was potentially the briefest and ugliest season in county history one of the most memorable.

They not only won the 3A state championship, they won them all, a feat only two incredible Salisbury teams had accomplished in the modern history of Rowan County.

They knocked out some opponents from the 3-point line, but usually they won with jabs — relentless intensity and defensive effort.

They won because they didn’t care who scored the points. Any of five girls could have the hot hand on a given night, and the girl who scored two grinned as big after a victory as the girl who scored 18. That sort of team-first stuff is incredibly hard to find in a me-first world. Maybe that was the key to everything.

One of the media members who got to watch Carson play for the first time against Asheboro in the state championship game said they looked like they had come to sell Girl Scout cookies, but they showed they were Girl  Scouts who could — and would — cram those Tagalongs and Samoas down your throat. And they’d do it with a smile.

Carson head coach Brooke Stouder is the Post’s coach of the year, the fourth time she’s been honored.

Stouder is 235-158 in 15 seasons, and that’s after Carson was 4-67 in her first three. She’s second to East Rowan’s Jesse Watson on the all-time wins list for Rowan girls basketball.

A state championship put Stouder on top of the heap in a wildly successful season for Rowan girls. Lakai Brice’s Salisbury squad and Anthia Smith’s North Rowan team ran the table in their leagues, just as Carson did. Ashley Poole’s West team, basically freshmen, finished second behind Carson in the North Piedmont Conference. In any season, except the COVID season, West would have made the state playoffs.

Championships are won by players and by coaching staffs, as well as by head coaches.

“I couldn’t have asked for a better staff,” Stouder said. “Everyone had such a wide range of experience to offer. We had a lot of eyes and everyone saw different things.”

Dee Miller, who was a head coach at Salisbury, is the primary defensive coach. She teaches the fundamental principles on which Carson’s ferocious defense is based.

Chloe Monroe, a 2012 graduate who was a very good player for Carson, is the mathematician and statistician. Her keen mind analyzes all the numbers and percentages and finds ways for the Cougars to improve.

“It’s a very big asset to have someone who has played in the program on the coaching staff,” Stouder said.

Lu Gamewell, who wore a motivational mask to every game, is normally the jayvee coach, but Carson didn’t have a jayvee team, so she was also on the varsity bench.

“Lu coached me in basketball and track in high school,” Stouder said. “She’s been around. She’s got as much experience as anyone.”

Kurt Misenheimer, Stouder’s younger brother and a former head coach at East Rowan, was a volunteer coach. The last time he had been on the Cougar bench was 2012 when Carson had a breakout season and went 23-4.

“Collectively, it was a great group,” Stouder said. “They all care about the girls and they all wanted to win while doing it the right way. We all had the same goals.”

The five Cougars who did the scoring are on the all-county team that will appear in Sunday’s edition.

Lani Isley, a point guard who averaged 1.9 points per game for the season, isn’t, but the tough wins, including the last one, don’t happen without her.

In Carson’s five playoff games, she had 26 assists and 13 turnovers, while doing the majority of the ballhandling. For the season, she averaged 4.7 assists and 1.6 turnovers.

“The only stat she ever worried about was how many turnovers did she have,” Stouder said. “She’s a tremendous athlete, good at whatever she does. She defined team player, and in a lot of ways, she was our heart and soul.”

Isley could push the ball in transition as few people can push it and she was a manic defender.

Carson’s toughest test in some ways was the long road trip to Enka for a third-round game. Enka had ousted Carson from the playoffs the previous season in a struggle in China Grove that came down to the final shots.

Enka’s first-team All-State player Emily Carver had a 48-point game this season and is a skilled and crafty player. Isley guarded Carver in Carson’s 64-56 win at Enka. Carver scored 18, but shot 6-for-20.

“Lani did a great job, made her work for everything she got,” Stouder said.

It was a season in which Stouder and all the Cougars never stopped working.