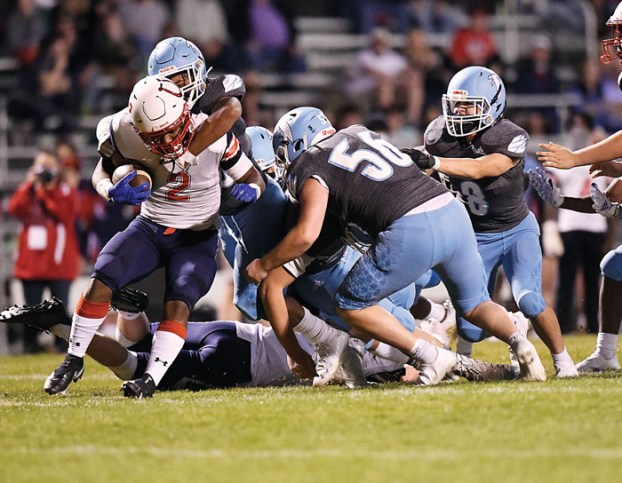 West Rowan’s Ashton Matthews (56) joins a swarm of Falcon defenders bringing down a runner. File photo by Wayne Hinshaw, for the Salisbury Post

TROUTMAN — The last two weeks, West Rowan’s football team has been trounced statistically, but has won on the scoreboard to stay in the thick of the North Piedmont Conference race.

A wild 27-21 home win against East Rowan was followed by a wilder 20-14 verdict at South Iredell last Friday.

West (2-2, 2-0) managed a meager 44 yards of offense in the second half against South Iredell — 21 rushing, 23 passing — and had just 13 second-half snaps that weren’t punts. After halftime, the Falcons ran just one play that gained more than 5 yards.

Yet, West prevailed. That’s the bottom line, the only stat that really matters.

“That fourth quarter seemed to last two hours, it really did,” Kraft said. “I don’t think the clock ran at all on a few plays. There was a roughing-the-passer call for us on a fourth-and-11. But we got out of there with the win. That was Friday and this is Wednesday, and I’m just now coming back down to earth.”

West dominated the first half behind the accurate passing of QB Noah Loeblein, mostly to Damon Phillippe, and a defensive effort that smothered South Iredell. At the break, the Vikings, who had already lost a conference game and were fighting for their season, had only 50 yards of offense. West led 14-0 at halftime.

Noble, a mammoth offensive tackle who has become a critical two-way player for the Falcons, made one of the key plays of the first half — an unlikely interception.

“James Ball and I shot through the same gap and got pressure on the quarterback, and then I saw the ball in the air and knew it was a chance to make a play,” Noble said. “I wanted to run with it, but guys were swarming me.”

As the backup center to Biggers, Noble played quite a bit on the strong West basketball team that won two playoff games, so he missed the football season opener at Salisbury.

But he hit the ground running after that.

Ball estimated that Noble played 80 percent of the snaps on defense Friday, in addition to anchoring West’s offensive line. He was a difference-maker.

Kraft is certain the defensive line is the team’s strength because it generally roughs up the offensive line in practice. Ball and Matthews have a lot of experience. Matthews is deceptively strong and Ball is very strong. Kraft describes Ball as a “schoolyard bully.”

“If Ball gets his hands on you, you’re in trouble,” Kraft said.

Biggers, a 330-pounder headed to Georgia Tech, is obviously special.

“Zeek doesn’t have huge stats because everyone runs away from him,” Kraft said. “It’s smart to run away from him because if you run at him it’s not going to be a very good play for you. Zeek does a good job of not letting those game plans frustrate him. He’s matured a lot in the past year.”

The flow of the game changed in the second half, as South Iredell resorted to a “heavy package,” extra-large backs plowing downhill behind extra-large blockers. The Vikings were bringing more men and more pounds to the point of attack than the Falcons could handle, and the Vikings launched a long, grinding scoring drive that made it 20-7.

“They put some defensive linemen/tight end types in the backfield and they were out-numbering us,” Kraft said. “They smash-mouthed us.”

When South Iredell kicked off following its first score, West DB Hunter Watts collected the ball at his 5, got some blocks, found the West sideline and went all the way. Now it was 20-7 in the final seconds of the third quarter, and West’s weary defense trudged back onto the field.

This time South Iredell scored very quickly with its jumbo backs. It was 20-14. There were still 11 minutes left, and the Falcons were in trouble.

“It was pretty hard for a while,” Ball said. “They’d changed up their offense to something we hadn’t expected. It took some time to catch on to it, but then we started to figure it out.”

West possessed the ball for about a minute, and then South Iredell was coming at the Falcons again. This time West held, getting a huge stop with 8:46 remaining to halt the Vikings’ growing momentum.

“Sometimes it was like eight against four,  but we stopped them,” Noble said. “There were a lot of must-stop to win the game, and we always got the stops. Stay low and drive. That’s what we kept saying.”

With 2:46 left, the Falcons stymied the Vikings on downs at the West 26.

It was over if West could get a first down, but after a 1-yard run and two incomplete passes, the Falcons were punting again. Only 26 seconds had been erased from the clock, and South Iredell was on the attack again.

“Our defense was dog-tired, but no one complained,” Kraft said. “They just went back to work.”

The final stand by West’s defense came at West’s 31-yard line with 26 seconds on the clock.

“I was able to get some pressure on the quarterback and he had to throw on the run on fourth down,” Ball said. “But we were nervous the whole fourth quarter. In a one-score game, one mistake can beat you.”

It was a bigger victory for West than some realized. West hadn’t won a game in Troutman in this century.

A homecoming game with North Iredell is set for this  week. Then there’s a contest with Carson that is certain to be exciting.

The goal for West is to get to the final night of the regular season at Statesville’s Greyhound Hollow with a 4-0 conference mark. If the Falcons can do that, they’ll be competing for a league championship and a playoff berth.

“When it’s only a seven-game season, you get down to business in a hurry,” Kraft said. “But I think that’s awesome.”