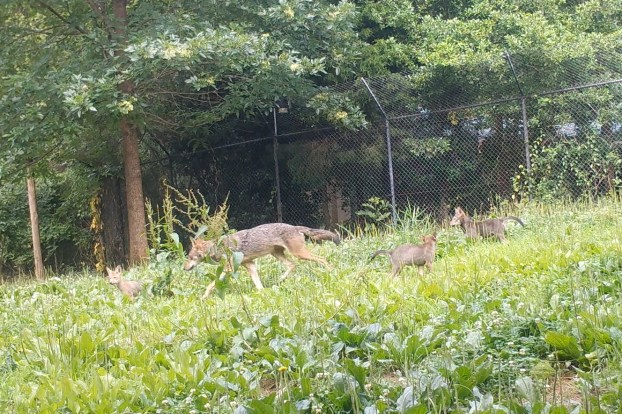 Photo submitted - The red wolf pups with one of the parents. The wolves are reclusive and difficult to catch on camera.

SALISBURY – Nearly a year into rearing red wolf pups, Dan Nicholas Park is hoping there will be a new litter next month.

Red wolves are one of the most endangered species in the world, with estimates for the wild population in the low double digits. All wild wolves are in eastern North Carolina. A few hundred wolves are in captivity.

The pups born to local wolves Magma and Clay at Dan Nicholas Park are getting close to adulthood. In the wild, red wolves are monogamous for life and live in family units that may look familiar to humans, with parents raising young that go on to help the family before they are old enough to strike out and start their own. The three pups born last year are expected to stay through the fall, but eventually they will move to other facilities as part of a program that sustains the wolves in captivity.

Cline said the prospect of the young wolves moving out does not make her sad because they will contribute to sustaining the species.

The wolves are apex predators and historically were an important part of local ecosystems. These days, coyotes rule the roost for wild canines.

The Red Wolf Survival Plan was started with the goal of conserving the species in captivity and rebuilding the wild population via reintroducing wolves to their natural habitat. For years, the program has not been able to reintroduce wolves, but in January a mandate passed down by a federal court judge required the U.S. Fish and Wildlife service to resume reintroductions. This was big news for the plan.

“It’s quite frankly why we’ve kept doing what we’ve been doing during the past few years,” survival plan coordinator and red wolf expert Chris Lasher said.

Lasher said the hope is to start reintroductions this spring with adults and pups. First, the program needs to identify a new wild litter and insert them. Lasher said the wild wolves seem to always accept the new additions.

The program will also add at least seven newly participating facilities all over the country, bringing the total number of facilities to at least 50. The St. Louis Zoo has committed to a dozen shelters for red wolves.

Lasher said Magma and Clay are not likely candidates for reintroduction to the wild because they are a proven breeding pair that can produce wolves in captivity. The program’s first choices for reintroduction will be wolves that are not as valuable for captive breeding and have had less exposure to humans.