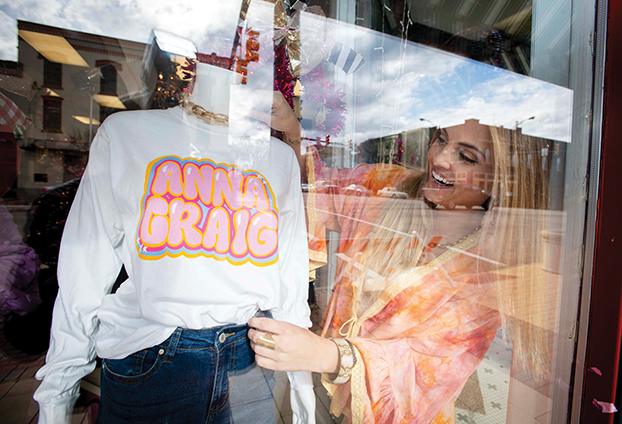 Upon opening the door to AnnaCraig Boutique in downtown Salisbury, customers are met with a cascade of bright and bold colors and patterns. That’s the signature style and personality of young business owner Drew Myers.

Myers, 29, grew up in Cleveland and graduated from West Rowan High School in 2010. She spent some time working at a salon in Charlotte before making a move back home to open — at just 23 years old — a boutique in downtown Salisbury. Initially, the store was to include both a boutique and a salon, but thanks to social media and word-of-mouth advertising, Myers said the boutique “took off right when we started.”

“I didn’t like the hustle and bustle of Charlotte,” she said. “Salisbury wasn’t so bad after all.”

Myers said she was unsure what to call the store at first. She ultimately decided on “AnnaCraig” as it combines her mother’s name, Leanna, and her father’s name, Craig. Plus, “AnnaCraig” was the name her grandmother wanted for Myers before she was born.

When the pandemic arrived last March, Myers longed for Friday nights when downtown Salisbury was bustling with locals and tourists. But the pandemic provided the opportunity to expand the boutique’s online business, which continues to boom. Now, the boutique is selling just as much as it was before the pandemic.

Myers said she appreciates the small-town feel and all the community support that rests in Salisbury.

After opening in 2014, Myers ventured to Mooresville to open a location there. But that store was recently closed because online sales have taken over. Additionally, it was harder to connect with residents in the way AnnaCraig Boutique has in Salisbury.

Most of Myers’ days are filled with talking to vendors and answering emails. But she also works a lot of random hours to get things done when others aren’t there. She’s not used to slowing down.

When she’s not working, Myers enjoys hanging out with family, friends and her two dogs, Rigley and Marlon. She loves being on the water.

Myers appreciates the vibe that’s been cultivated with new restaurants cropping up downtown and within the local community. Looking ahead years from now, she wants to see more downtown growth, including more entertainment for young people.

Her message to other young entrepreneurs? “Just go with it.”

“Things will fall into place,” Myers said. “Dream big. That’s basically what I did. It might have sounded crazy, but I look back now and I’m glad I was.”

In terms of other career aspirations, sometimes it’s best “to stick to what you know.”

“I think I’ll stick with AnnaCraig Boutique and continuing to grow the online business,” Myers said. “I couldn’t imagine doing anything else.”

If Nina Oliver could have cloned Alyssa Harris before moving on from the Rowan County Health Department, she would have.... read more