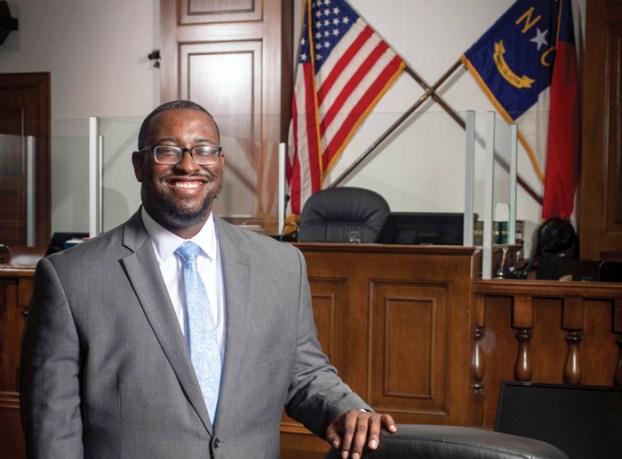 Spirit of Rowan: Ryan Stowe, the only Black criminal defense attorney in Salisbury, is growing his law practice

Ryan Stowe’s original plan of getting into politics didn’t work out the way he thought it might, but he quickly pivoted into a more promising occupation.

He’s now the principal attorney at Stowe Law Firm, PLLC on Kerr Street. The Salisbury High School graduate is practicing law in his hometown, a first-generation Rowan County attorney focusing on criminal defense, including such issues as traffic violations and DWIs.

He said he hasn’t been involved in a murder case or more serious felony offenses yet, but he will be ready once that time comes in his career.

Stowe said he gets the same question other defense attorneys get: “How could you defend these bad people?”

He said it’s more of a question of balance.

“It’s not the sum of your entire life if you do one bad thing,” he said.

And he wants to try to help people move forward. “It’s usually the worst mistake of their lives, or a lapse in judgment,” he said.

Of course, COVID-19 has compounded the problem for many since court cases were put on hold. So if you were charged with a crime last year, the outcome has been delayed much longer than in other times.

“It’s kind of sad,” he said. “Pending cases for some means your life is on hold.”

That’s the kind of problems he’d like to solve as court activity slowly resumes.

When he first went off to North Carolina Central University, a historically Black institution in Durham, he didn’t have such ideas. But at some point he changed his mind from going into politics to continuing to get his law degree there after completing his undergraduate degree. He also changed his mind in high school from spending more time on the Hornets football team. Stowe played one year, his junior year, but decided he wasn’t going to get a college scholarship on the football field so decided to put his energies and time elsewhere. He did play in the band for two years.

At N.C. Central, he served as senior class president, was a member of the Alpha Phi Alpha fraternity and was a Centennial Scholar, which is an academic program set up for men. In law school, he was president of the Phi Delta Phi legal fraternity in his third year.

He opened his firm in 2017 and moved into the criminal defense focus by random chance when a friend was charged with a low-level offense, “but he forced me to take the case,” Stowe said.

Stowe said he originally came back to Salisbury instead of trying a larger city because he wanted to help the people he knew and grew up with. “Unfortunately, I’m the only Black criminal defense attorney in town,” he said.

He points out that Black attorneys only make up 4.4% of the nation’s total. And many smaller, rural areas have no Black attorneys since lawyers often choose bigger metropolitan areas for their practices.

Stowe, who recently turned 30, has been listed on the National Trial Lawyer 40 under 40 list. He is a member of Rotary Club, Beta Nu Lambda Chapter of Alpha Phi Alpha Fraternity Inc. and the N.C. Pro Bono Honor Society.

Both of his parents still live in Salisbury — mom Sondra Teamer and dad Daniel Stowe. He’s also engaged to be married to another Salisbury High School graduate, Jatara Propst.

His website includes an FAQ section and his blog, which offers details on questions such as what happens when you refuse a breathalyzer? His answer: North Carolina has very strict laws when it comes to driving while impaired and DWI refusals. As a driver on North Carolina roads, you need to be aware of some of the laws that guide road usage so you can know your rights. North Carolina has an “implied consent” law. This law requires that all drivers who are arrested for DWI submit to chemical testing IE breathalyzers. This testing determines the blood alcohol concentration (BAC) or level of drugs in their blood.

You can find more details about Stowe and see complete answers to such questions at stowelawfirmnc.com,

Spirit of Rowan: Career in education: Andrew Smith worked his way from teaching to administration