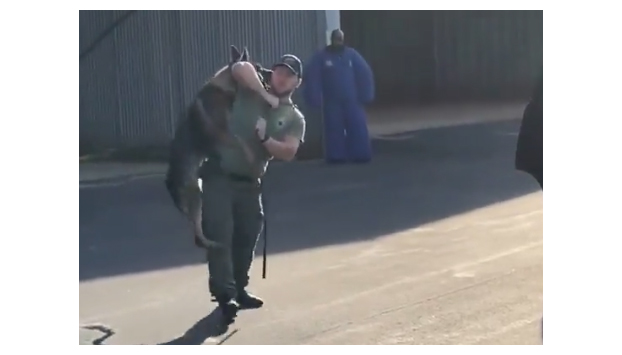 A screenshot from a video in which former Salisbury Police Officer Buddy Hampton is pictured pulling a dog over his shoulder with a leash.

SALISBURY — The Salisbury Police Department says James “Buddy” Hampton, a master police officer, resigned after an investigation into an incident during which he was pictured on video “engaging in inappropriate discipline” with a K-9 officer.

The video drew national attention, protests by animal activist group People for the Ethical Treatment of Animals and calls for Hampton’s firing. While the incident occurred in October, the video was leaked to a Charlotte TV station in early March. At that time, Hampton was separated from the animal, the police department held a news conference saying it would investigate the matter and brought the K-9 officer, a dog named Zuul, to the news conference to show he was OK.

In a news release on Wednesday, the Salisbury Police Department named Hampton, who was hired by the department in 2013, as the police officer depicted in the video and said a third-party review determined, “That Officer Hampton had acted in a manner entirely inconsistent with his K-9 training and had violated Police Department policy. As a result, he was recommended for termination.”

Before the police department’s disciplinary process, which requires a due process hearing, concluded, Hampton gave his resignation, effective immediately.

“The Police Department did not incentivize or otherwise request Officer Hampton’s resignation, which he tendered as a matter of right,” a news release stated.

The third-party investigation was handled by U.S. ISS Agency, the Salisbury Police Department said. It’s a firm based in Huntersville that says its employees have 150 years of combined security and law enforcement experience. It provides security consulting, pre-employment and due diligence, investigative, law enforcement and fire services.

Hampton’s personnel file, which was obtained by the Post through a public records request, shows no demotions or suspensions since his initial hiring. He was promoted to master police officer in November 2019, receiving a pay increase to $51,615.06 per year. He received merit and cost of living increases in December of the same year, bringing his salary to $53,266.74.

The police department said it will continue to review and make changes to its K-9 training operations, policies and procedures to align with industry best practices.

The leaked video, which is about one minute, shows what Salisbury Police Chief Jerry Stokes described as a training exercise. As Hampton walks to a man in a “bite suit,” Zuul jumps out of a police SUV. Hampton turns and yells, “Stay.” Then, he connects Zuul’s collar to a leash, pulls the K-9 up onto his shoulder by the leash and carries him back to the police SUV hanging from the leash. The video then shows Hampton slamming the dog into the side of his SUV, pulling the dog up by his collar to place him back in the vehicle and striking Zuul once he’s back in place.

The video shows another police vehicle behind the one to which Zuul is returned. There, voices comment about “no witnesses” and talk about turning off cameras.

Records obtained by the Salisbury Post show Zuul was not evaluated by a veterinarian until after the video leaked in March. That assessment, at Concord Parkway Animal Hospital, didn’t find any damage of note related to the October incident. The previous assessment was in June at Lazy 5 Vets in Salisbury.